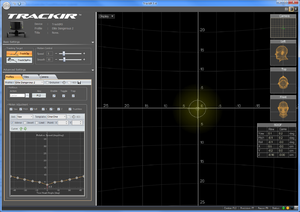 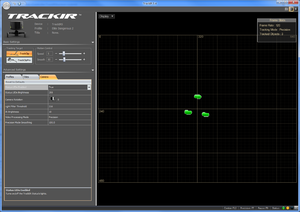 Includes the camera, the base and the TrackClip.
A cap or a visor is recommended to attach the TrackClip.
Possible TrackClip mis-tracking by other light sources and reflective materials. (such like the lamps, eyeglasses, windows, TV monitors, ...)
The TrackClip PRO is sold in a separate bundle.
Numerous reports of broken TrackClip PRO and lack of durability.
TrackIR software may need to be launched as administrator for some games.

Adjustable movement scale for all degrees.

A cheaper and more durable alternative for the TrackClip PRO.

They also sell a PlayStation 3 Eye camera with the infrared filter removed that can be used with their own head tracking program.

However it only tracks three degrees of head movement (Pitch, Yaw and Roll) and have occasional drifting and misalignment.

A free face tracking software that only base on your webcam tracking your face.

A free head tracking program that can use a webcam to track IR points.

The website also feature a documentation about how to make your homemade IR LEDs mount.

Another TrackClip PRO alternative that sells a cap with infrared LEDs directly mounted on it or the traditional TrackHat Clip mountable on your headset.

They also sell a PlayStation 3 Eye camera with the infrared filter removed that can be used with their own open source program.