This page is for the ARMA II mod. For the stand-alone title, see DayZ.

DayZ is a modification for Arma 2 and requires its expansion Arma 2: Operation Arrowhead.
DayZ Commander is highly recommended as the best one-stop program to install, update and browse DayZ servers - no other programs are required.
DayZ is in early open alpha stage, and is very unfriendly to install and run for new users, while many bugs, gameplay problems and rampant cheating persist.[1]

Original guide located on the DayZ Wiki.
DayZ Forum - official forum which the developer participates in and has the most active community.
Steam Community Discussions 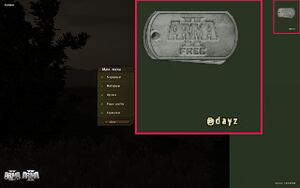 @DayZ appearing means that the mod has loaded correctly.

DayZ requires Arma 2: Combined Operations, either in its full or Lite version.
Requirements can be fulfilled by any above combination of Steam, retail and digital distribution packs for Arma 2, Arma 2: Free and Arma 2: Operation Arrowhead as long as each part has been run at least once before.

Arma 2: Free is downloadable via the Arma 2: Free site.
Recommended version if one solely wants to play DayZ for the cheapest price, as Arma 2: Operation Arrowhead is normally cheaper than Arma 2: Combined Operations.
5-15% performance increase due to lower resolution textures and audio.[2]
No access to the main Arma 2 campaign content.

Manual installation of DayZ is relatively complex, with no official client or method of installing the mod easily.
Successful installations will show that when Arma 2: Operation Arrowhead is run, the @DayZ text will appear on the right of the menu screen. 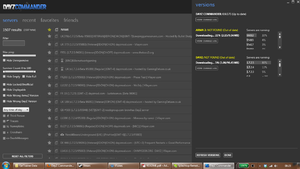 Launcher, mod updater, server browser, and friends listing.
Highly recommended as the best way to patch and launch the game, as well as the only program which lists friends.
The only program that is required as long as your version of Arma 2: Combined Operations meets the requirements.
Support for installing any patch version including the beta patch. 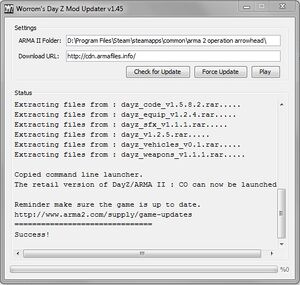 This error is most likely caused by incorrectly inputting the location of your Operation Arrowhead folder.[3]

This program can install, patch and launch DayZ.
The officially supported method of installation listed on the DayZ website.[4]
Supports other Arma 2 mods.
Six Updater has unnecessary features for those who only want to play DayZ. In which case, the DayZ Commander or Day Z Updater Tool (Worrom) is recommended.

Many servers require the use of the beta patch.
The beta patch is backwards compatible, so one can play on beta and non-beta servers.

This issue may be from having too many background programs running.

If this doesn't work, you may alternatively:

This issue is caused by large server load, and will resolve itself over time.
If it does not resolve itself, attempt these fixes:

Caused by attempting to connect to DayZ servers from within Operation Arrowhead, rather than launching the game as Combined Operations.

This error will occur if the mod was installed incorrectly, or if the shortcut has the wrong appendage to the target line.

This error is generally harmless and should not impact the game itself. Simply click OK and play as normal.

This error is generally harmless and should not impact the game itself. Simply click OK and play as normal.

Caused by install folder being moved from original location, or exe file being renamed.