Sonic Generations is a singleplayer platform developed by Sonic Team and published by Sega. The game was intended as a celebration of the 20th anniversary of the Sonic the Hedgehog franchise, with it featuring the play-styles and character designs of two different eras of Sonic ("Classic" and "Modern") and levels spanning the franchise from 1991 to 2010.[1]

The PC version of the game was released on November 4, 2011 on Steam, with Europe and Australia exclusively receiving a physical release. Unlike the console versions, the PC version removes the unlockable (emulated) copy of the original Sonic the Hedgehog (1991).

On September 29, 2016, all Steam users received the Casino Night DLC (an in-game pinball mini-game) for free[2].; this DLC was initially an exclusive GameStop pre-order bonus for the console versions that was later made available for purchase on Steam.

Sonic Generations features an active modding community; players have produced a variety of mods for the game’s stages, models, visual effects, audio, and animations. One such notable mod is the Unleashed Project, which ports the 9 "daytime" stages from Sonic Unleashed into the game[3] (replacing the vanilla stages).

Various mods that enhance the vanilla game are highly recommended, even for a first playthrough. These mods include HQ pre-rendered cutscenes, increased shadow resolution, and HUD upscales. See Essential Improvements and Modifications sections for more information.

Sonic Retro - A large fan website dedicated to the Sonic the Hedgehog franchise. Various mods for all the games can be found here.
Steam Community Discussions 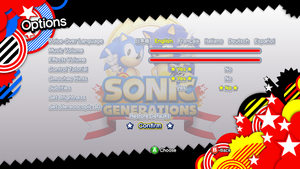 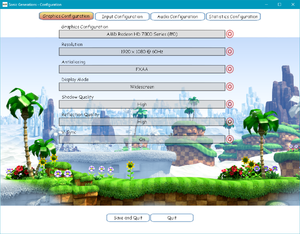 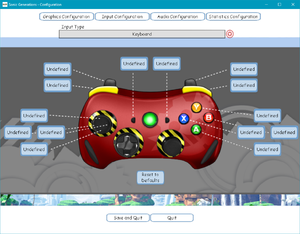 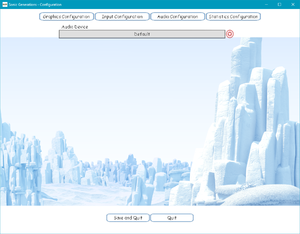 Configuration Tool does not open/crashes[edit]

Various mods provide gameplay and graphical enhancements that are strongly recommended, even for a first play-through.
Users of Nvidia GPUs utilizing the Turing architecture will encounter issues with some stage mods.[15]

Mod manager for all Hedgehog Engine titles. Required for all non-exe mods.
Features more functions than SonicGMI, such as a code loader and ability to automatically update mods.
Compatible with DLL-based mods, eliminating the need of additional modified game executables.
Some older mods have issues running in HedgeModManager. If this is the case, use SonicGMI instead.[16]
Ensure "Enable save file redirection" is checked in HedgeModManager so that the mod uses its own save file called "cpkredir.sav", instead of "sonic.sav" which is linked to the Steam Cloud. That will avoid save file progress being accidentally overwritten or lost.
Older mods may still be able to run in HedgeModManager by editing the "mod.ini" file inside mod folders. The "IncludeDir0=" code is what causes older mods to not run in HMM. When that code tries to specify a location, for example (IncludeDir0="./mods/Sonic 2006 Voice (Sonic)") it won't run because the location specifications is made to work with SonicGMI and not HMM. Changing it so it only shows (IncludeDir0=".") solves the problem and makes the older mods fully compatible with HedgeModManager.

Replaces the PC version's 480p pre-rendered cutscenes with the PlayStation 3 version's 720p ones.
Requires the "1280x720 Media Player" code to be enabled from HedgeModManager, to avoid black screens or crashes during cutscene playback.

Restores the missing intro cutscene for the Casino Night DLC, which was present in the console versions but absent from the PC version.
Video demo from author available here.

Replaces the Xbox controller button-prompts with their DualShock equivalents, as well as voice-clips & video files referencing the Xbox buttons.
Utilizes the official icons, voice files and video files ripped from the PlayStation 3 version of the game.

A hex modification to the executable which increases the game's shadow resolution.
Only applies to shadows cast by dynamic objects, not those that are baked into the textures themselves.
May impact performance.
Included as a toggleable code in HedgeModManager.

Adds multiple new features and fixes to the vanilla Sonic Generations renderer.
Minimal-to-no performance impact.
Features the ability to toggle between the Sonic Unleashed and Sonic Generations shader styles.
Frequently updated (as of 2021).

Alternative to "Better FxPipeline". Contains considerably less improvements & features, and is not being worked on anymore.
The game renders generic shadows at 90° angles; this mod enables true directional shadows and light shafts, among additional graphical tweaks.
Minimal-to-no performance impact.
Also includes a version for the "Unleashed Project".
Lighting is inconsistent, with some areas making Sonic appear far too dark (e.g. Chemical Plant: Act 2).
Hub world is given an emanating, bright glow (straying from the original style).

Ports the 9 "daytime" stages from Sonic Unleashed into the game, replacing the original Generations stages.
Features graphical and gameplay tweaks, as well as a custom hub-world.
Does not work out-of-the-box on NVIDIA Turing GPUs. However a workaround has fixed this.