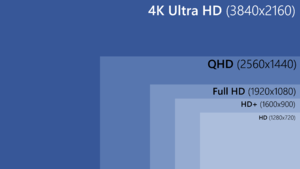 Some games do not support 4K UHD natively.[4]
Running games at this resolution requires a high-end rig - in 2013, achieving 60 FPS at max settings on Metro 2033 required four NVIDIA GTX Titans.[5]
Mainstream 4K displays are currently limited to a 60 Hz refresh rate. 4K monitors with a high 144 Hz refresh rate were released in mid 2018, but the initial retail price is extremely high ($2000 for 4K 144Hz including HDR and G-Sync).[6] Additionally, even very powerful modern systems are still not able to achieve anywhere near 144 FPS in 4K in the most recently released games.[7] [8]. At the end of 2018, the only way to be consistently certain of achieving 100+ FPS in most modern titles at 4k is with 2 2080 TI cards in NV Link SLI, which would cost approximately $2500 for the GPUs alone.[9]