This page is for Windows 95 compilation. For the emulated re-release, see Sonic 3 & Knuckles.

This collection includes Sonic the Hedgehog 3, Sonic & Knuckles, Sonic 3 & Knuckles, and the Blue Spheres lock-on game (listed as "Special Stage Mode").
Higher resolutions over other versions.
Allows one the choice of playing Sonic 3 or Sonic & Knuckles standalone, the way they were initially released.
The original Genesis/Mega Drive music has been replaced by synthesized MIDI. Use S&KC Mod Loader to restore the original Genesis/Mega Drive music.

The official developer website
Sonic Retro - A huge fan site for everything Sonic the Hedgehog. Mods for all the games can be found here.

This game is not available digitally. This game was also included in Sonic Action Pack, Sonic Action 4 Pack, and Sega PC Mega Pack.[1]
A demo is available.

Simple and easy-to-use launcher with many options and tweaks.

Korama's Sega PC Reloaded is an installer, launcher, and patcher for some of Sega's older PC games. It currently supports Sonic & Knuckles Collection, Sonic CD (1995), Sonic 3D Blast, and Ecco the Dolphin (deprecated). It also fixes issues and/or broken functions of these games and allows them to run on Windows Vista and later along with some added improvements.

The S&KC Mod Loader can allow tweaks and mods to be applied on Sonic & Knuckles Collection.

If using Sega PC Reloaded, its settings will be stored in SONIC3K.ini under <path-to-game>.
The SonicGameMode variable changes which game will be played: 0 is Sonic 3 & Knuckles (default), 1 is Sonic & Knuckles, and 2 is Sonic the Hedgehog 3. 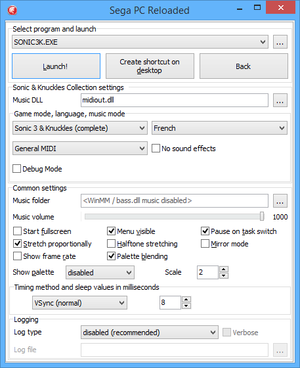 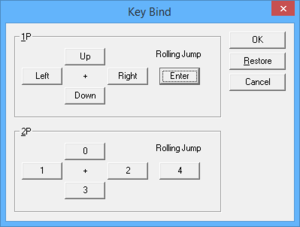