This page is for the 2011 emulated release. For the decompiled port of the 2013 mobile port, see Sonic the Hedgehog 2 (Mobile Decompilation). For earlier compilation versions, see Sega Smash Pack 2.

Official developer site
Sonic Retro - A huge fan site for everything Sonic the Hedgehog. Mods for all the games can be found here.

Unless otherwise stated, it is assumed that the US release is used
Some browsers (like Chrome) will have significant slowdown while streaming. It is recommended to use Firefox, as no such issues occur

This game is available for free and legal streaming via the Internet Archive. It has been configured to run under MAME emulation.

To modify emulator settings, press Tab ↹. Controller support is available for compatible browsers (hold down a button on the controller while loading the page).

It's unknown whether this game follows the XDG Base Directory Specification on Linux. Please fill in this information.
Configuration settings are shared between all Sega Mega Drive Classics games.
Folder name varies by region. 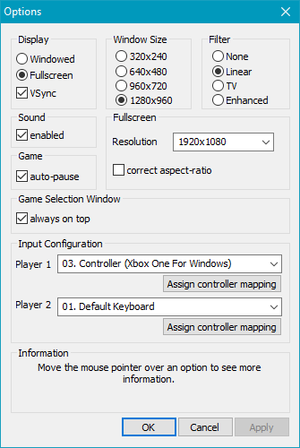