Sonic CD (2012) is a cartoon side view platforming game developed by Sonic Team and published by Sega. It is enhanced remastered version of Sonic CD that uses the Retro Engine developed by Christian Whitehead.

The Retro Engine remaster of Sonic CD was originally developed for Xbox 360, PlayStation 3, Android and iOS devices in 2011. It was later ported to Windows through Steam in 2012. The Retro Engine remaster is notable in that it is not a direct port of the Sega CD version nor emulation, but rather rebuilt from scratch using the engine which allows for an array of enhancements such as native widescreen presentation, 60 FPS Special Stages, higher quality FMV cutscenes, the ability to use the Spin Dash mechanics from Sonic CD or Sonic the Hedgehog 2, and includes both the Japanese and North American soundtracks. The success of the 2012 Retro Engine remaster of Sonic CD lead Christian Whitehead to continue working with Sega and a collaboration with Headcannon to develop of similar remasters for Sonic the Hedgehog and Sonic the Hedgehog 2 for Android and iOS devices in 2013, whom also went on to collaborate with PagodaWest Games to develop Sonic Mania in 2017. This game was delisted on Steam on May 2022 but it has been re-released as part of Sonic Origins in 2022.

The game physics and speed in Sonic CD (2012) are tied around 60 FPS, meaning slowdowns on lower end machines and speedups with high refresh rate monitors. Despite featuring multiple resolution scaling options, the game has a persistent smoothing effect, making it impossible to provide a sharp pixel image quality. A mod loader for the Steam version of the game was released in 2017, allowing for modifications to be possible. An open-source decompilation port of Sonic CD (2012) developed by Rubberduckycooly and other contributors was released in 2021, featuring various improvements and a built-in mod loader similarly to the mobile decompilation ports of Sonic the Hedgehog and Sonic the Hedgehog 2.

Official developer site
Sonic Retro - A huge fan site for everything Sonic the Hedgehog. Mods for all the games can be found here.
Steam Community Discussions

An open-source decompilation of Sonic CD (2011). Requires the Data.rsdk file from the Steam version or extracted from the mobile version's APK to run, however, the former is recommended for better compatibility with unofficial fixes and mods. The mobile version's data files can be converted to the Steam version with this mod.
Allows the game to be displayed with nearest-neighbor and pixel-perfect scaling, features keyboard and controller remapping (via editing its settings.ini), native x64 and x86 Windows support, a built-in mod loader, and full support of the updated scripts from the mobile version, allowing for features the official PC version never received. 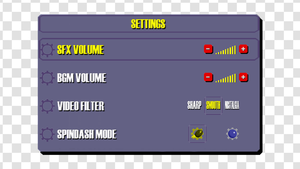 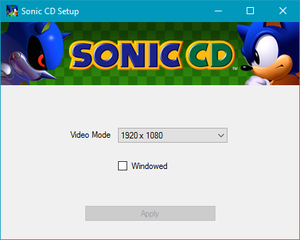 Use the decompilation port for unstretched scaling and support for aspect-ratios other than 5:3.
Glitches appear in aspect-ratios wider than 5:3 with the Steam scripts. Use the mobile scripts to alleviate the glitches with wider aspect-ratios.[citation needed]

The game's graphics in this re-release appear rather blurry, regardless of resolution selected and the in-game Nostalgia video filter does not provide a clear nearest-neighbor image. Use the decompilation port for native Nearest-neighbor/pixel-perfect support, or follow this guide by TheA_Gamer554 for a workaround to make the vanilla game run in a pixel-perfect scaled image; pre-made 4:3 and 15:9 setup.dat files are available to download.[1] 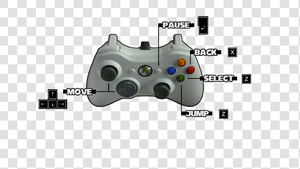 Xbox 360 Controller layout for the game. 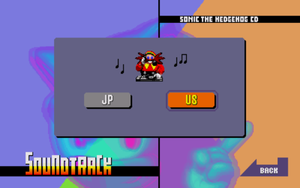 Mods require the Sonic CD Mod Loader for the Steam version; the decompilation port can load mods natively, however, toggling and rearranging the load order of each mod requires the developer mode to be enabled in settings.ini (see this tutorial for details). Mods are generally not compatible with each other unless they are created to be compatible.
The load order priority for mods in the Steam version is top to bottom, whereas the decompilation port's load order priority is bottom to top.