Doom Eternal is a FPS sci-fi game made by id Software and published by Bethesda Softworks. The game is a sequel to Doom (2016) which continues the time line of the classic Doom series, and uses the newer Id Tech 7 engine.

On May 14, 2020 Update 1 for the game added empowered demons, echelon levelling and introduced the Denuvo Anti-Cheat protection to scan and report cheaters within the battlemode multiplayer game mode.[2] The introduced anti-cheat solution drew criticism because of its use of a kernel mode driver and introducing issues with the Proton compatibility layer for Linux players.[3] On May 20, 2020 id Software announced they were developing an update to remove the anti-cheat protection, which released on May 27, 2020.[4][5]

Doom Eternal's creative director announced that the game would not contain microtransactions on January 27, 2020.[6] However on March 10, 2020, details of new cosmetics were released as content tied with Twitch Prime subscriptions.[7]

On June 29, 2021 Update 6 for the game added ray traced reflections and DLSS. Many skins can be earned in-game through XP unlocks. Some skins were released as content tied with a Twitch Prime subscription until July 2020.[8]

Mod tools have been discussed by the developer but have never been officially announced.[9] A small modding community exists on Nexus Mods. Doom and Doom II are playable within Doom Eternal, but the WAD files are also included in the game files, and can be played externally using Doom source ports.

All versions require a Bethesda.net account[11] and Denuvo Anti-Tamper DRM.
The Bethesda.net release is no longer available as the Bethesda.net Launcher is being retired. Users who own games in their Bethesda.net Library will be able to transfer their games to their Steam account for free, even after the launcher is officially retired.

All editions contain access to Battle Mode.
Standard Edition contains only the base game.
The Ancient Gods - Part One and The Ancient Gods - Part Two include that specific story expansion respectively. It does not require the base game to play.
Year One Pass includes both story expansions. It does not require the base game to play.
Deluxe Edition includes the base game, Year One Pass, Demonic Slayer Skin, and Classic Weapon Sound Pack.
Collector's Edition includes the Deluxe Edition, a wearable DOOM Slayer Helmet replica, playable cassette tape and download codes for lossless digital copies of Mick Gordon’s DOOM (2016) and DOOM Eternal original soundtracks, DOOM Lore Book, as well as one “The Gift of Argent Power” 11” x 17” Lithograph.
Pre-orders received the Rip and Tear Pack DLC and Doom 64 for free.[12] 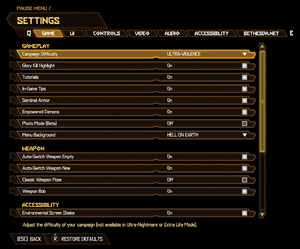 Saves have unique platform/account identifiers embedded. To transfer save files (between different launcher versions or within same platform) 3-rd party tools like DOOMSaveManager can be used. 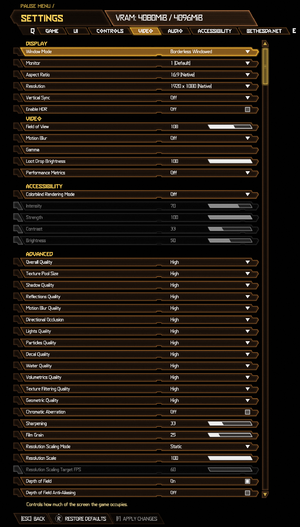 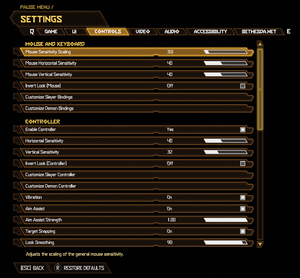 Provides additional remapping and ability to utilize unused features like gyroscope.
Right Trigger clicks on elements highlighted by cursor, instead of acting as expected. The gameplay and the map are not affected.
If Steam Controller is turned off during gameplay, and then turned on back, it refuses to send gamepad inputs. It can be bypassed by restarting the game or making a keyboard-only configuration. Dualshock 4 is not affected.
When gamepad is active, weapon wheel accepts gamepad input only. Configurations with simultaneous input (e.g. right trackpad of Steam Controller acts like a mouse) require mode shifting. 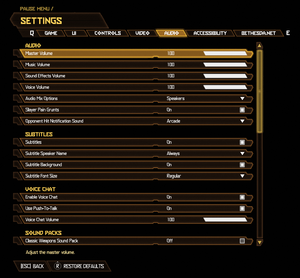 "No physical devices" error when starting up the game[edit]

The widely reported performance issues caused by the Steam Overlay and Steam in-game FPS-counter were fixed in the Steam Client update from the 29th of April 2020.[30]

Using Steam input's controller support can cause issues with DOOM Eternal default deadzones, causing a "stutter" like feel in the controls when moving forward or backwards.

Game language can't be changed unless you use a launcher or change Windows language settings.[edit]

Setting your audio card to play at a sample rate higher than 48000 Hz will speed up the audio and/or cause crackling/distortion. Higher sample rates will result in faster speeds.[citation needed]
There is no official fix for this bug.

Restores TAG1 spawns to how they were before Update 5.0.

Restores monster behavior to how they were before Update 5.0.
Hasn't been updated since Update 6.66 released for the game, making this mod very likely incompatible with the latest version of the game.
The mod has two versions: "Faithful" which just restores the monster behavior that was changed in Update 5.0, and "Balanced" which makes it's own unique balance changes.