Not available for sale on Humble and Steam in Germany.
Doom II: Hell on Earth is also available as part of Doom 3: BFG Edition. This version includes GOG.com and Steam achievements.
The MS-DOS version of Doom II: Hell on Earth included with Doom II Classic from Bethesda.net comes with two versions of the IWAD, one as a separate download, and the other is included with the re-release in the base folder. The IWAD included with Doom II Classic's installation is the unmodified version that is also found in the Steam release. The separate downloadable version has changes similar to Doom 3: BFG Edition, and may not be compatible with certain source ports.[2]

All patches for the retail versions of Doom II: Hell on Earth (as well as Doom and Final Doom) can be found at doomwiki.org, the latest patch 1.9 is also available at soggi.org. 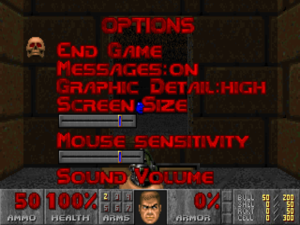