The Ultimate Doom is an updated version of Doom (1993) released on April 30, 1995, that features a new fourth episode, Thy Flesh Consumed. All digital distribution releases carry this version of Doom.
The Ultimate Doom is also available as part of Doom 3: BFG Edition. This version includes GOG.com and Steam achievements.
A shareware episode is also available (comes with the first episode, "Knee-Deep in the Dead").
The shareware IWAD can be downloaded separately from the main release (to be used with source ports).
The MS-DOS version of The Ultimate Doom included with Doom Classic from Bethesda.net comes with two versions of the IWAD, one as a separate download, and the other is included with the re-release in the base folder. The IWAD included with Doom Classic's installation is the unmodified version that is also found in the Steam release. The separate downloadable version has changes similar to Doom 3: BFG Edition, and may not be compatible with certain source ports.[3]
The Bethesda.net release is no longer available as the Bethesda.net Launcher is being retired. Users who own games in their Bethesda.net Library will be able to transfer their games to their Steam account for free, even after the launcher is officially retired. 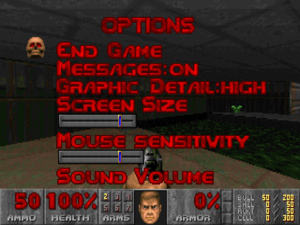 Universal Plug and Play (UPnP) support status is unknown.
These are the ports used by the vanilla game. The ports to forward for each source port will vary.
It is highly recommended not to forward these ports without a good reason! Some malware uses these ports as an entry point into systems.[18]