This page is for the original release. For the BFG Edition, see Doom 3: BFG Edition.

EAX support suffers from frequent visual glitches.
The game does not properly recognize the available VRAM on modern graphics cards, and as such forces the game to use lower image quality settings. See Textures are low-resolution, even on Ultra quality to resolve.

A faithful higher resolution icon for Windows can be downloaded from the Files section.
DOOM 3 demo. Also available on Steam.

A series of bugfixes and QOL improvements for the original Doom 3 game and its expansions Resurrection of Evil and The Lost Mission (optional)
Active development.
Compatible with dhewm3.
Bugfixes and QOL without drastic changes to the game.
Rebalanced Weapons and enemy AI. 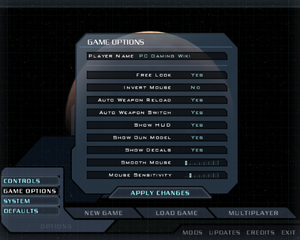 This game does not follow the XDG Base Directory Specification on Linux.
Resurrection of Evil configs are stored in <path-to-game>\d3xp\. 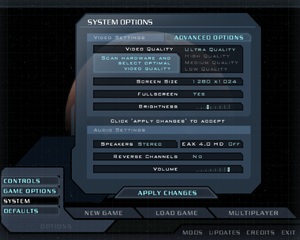 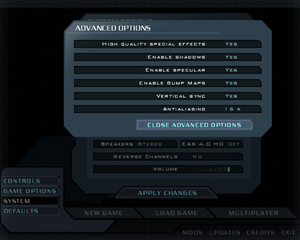 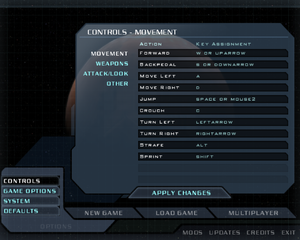 Using OpenAL (seta s_useOpenAL "1" in DoomConfig.cfg), which was added with patch 1.3 and is automatically engaged when EAX is turned on, results in frequent visual twitching/screen shifting. It is currently unknown whether this happens on all configurations, but the problem persists in the latest patch. A video of the glitch in action can be seen here (0:07, 0:11).

For Audigy cards a fix has been reported in the form of running an old beta driver, however this is only applicable to this series of sound cards and Windows XP.[14]

Textures are low-resolution, even on Ultra quality[edit]

Doom 3 and other id Tech 4 games suffer from a potential driver-related issue on modern Nvidia GPUs that causes the game to go into what appears to a "slow-motion" phase during some intensive scenes, where the framerate technically remains the same but game logic is slowed down and negatively effects performance, and it persists even when using the dhewm3 sourceport and/or microstutter fix. This issue can potentially be fixed through using an autoexec.cfg file containing the necessary CVar tweaks.

To install Doom 3 on Linux create a doom3 folder and then copy the following retail pk4 files to your doom3/base folder:

If installing the expansion pack you must also copy the following retail pk4 to your <path-to-game>/d3xp folder:

After copying all pk4 files to your hard drive run the Linux patch and direct it to your doom3 folder. You can start the game with the command: doom3. To launch the expansion use: doom3 +set fs_game d3xp

For Arch Linux, two PKGBUILDs are available in the AUR for Doom 3; one that builds from source and one that provides a binary (if keeping to the Arch Way, you should prefer to build from source).

Doom 3 has a small, but very knowledgeable mod community that is still very active and covers most id tech based games.

For ATI/AMD video card users, see here for a fix.
Adds the following features and improvements while retaining vanilla gameplay:

The Duct Tape Mod is a small patch for doom 3.
Adds flashlight to all the guns except the pistol.
Does not work with other mods like Redux.

Alternative for Duct Tape Mod.
Light is attached to the head.
Works with all weapons.
Weapons don't lose muzzleflash.
Installation instructions are incorrect, you must place the .pk4 file inside a folder of your creation placed in the root game folder (where the game is installed) in order for the game to recognize the mod.
The mod contains its own configuration folder after launching it once, separate from its actual folder, any resolution or other configurations must be made in the DoomConfig file the mod creates inside the folder yafm-hl it auto generates in the root folder when launched.

The OpenCoop Mod allows up to 4 players to play through the entire game + expansion pack together. Works both online and LAN.

It also adds in challenge maps, and 42 custom maps.

It is possible to easily change many things in the game simply by modifying text files located in <path-to-game>/base/pak000.pk4 (.pk4 files can be opened with 7-Zip or similar programs). Particularly the def folder contains definitions of monster health, gun damage, ammunition amount and lots of other tweakable game values.
TweakGuides has created a comprehensive guide for tweaking the game.

Windows 98 and ME have been tested to work with Doom 3 using this hack, but are not officially supported.