Final Doom is a set of two campaigns: The Plutonia Experiment and TNT: Evilution.
The Doom engine was made open source in 1997, making the game very mod-friendly.

Final Doom is also available to owners of Doom Classic and Doom II Classic as a free add-on. Requires a Bethesda.net account to download.

Some copies of the id Anthology version contain an updated Final Doom; the rest uses the original. The GOG.com release uses this alternate version.[3]

All patches for the retail versions of Final Doom (as well as Doom and Doom II: Hell on Earth) can be found here. 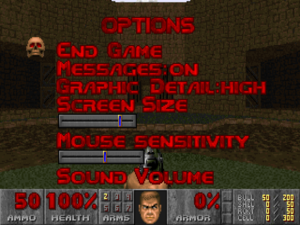 This bug has been patched in some releases of the id Anthology version of Final Doom; GOG.com and the downloadable version in Doom Classic and Doom II Classic carries the bug fixed version.[15]

The yellow keycard in MAP31: Pharaoh from TNT: Evilution is missing due to it being accidentally flagged as a multiplayer-only item, making it impossible to complete the level with 100% completion without resorting to cheats.[16]