From PCGamingWiki, the wiki about fixing PC games
This page may require cleanup to meet basic quality standards. The specific problem is: Mention newest patch and remove irrelevant fixes - update description. You can help by modifying the article. The discussion page may contain useful suggestions.

Doom 64 is a sci-fi FPS game developed by Midway Games, id Software, and Nightdive Studios, and published by Bethesda Softworks. It was the Nintendo 64 exclusive sequel to Doom II: Hell on Earth from 1997 in the Doom series, and was ported using the KEX Engine.

The game was originally released on March 31, 1997 for the Nintendo 64, using a modified, hardware-accelerated version of the id Tech 1 engine based on Doom's PlayStation port, and introduced new features to the engine such as animated sky textures, colored lighting, fog effects, smoother liquid texture animations, among other features while taking advantage of the console's unique 3-point filtering algorithm for its new higher resolution sprites.[1] It was, however, often mistaken for another port of the 1993 Doom during its initial release despite being an entirely new game in the Doom series due to its title (the original working title was The Absolution, referenced in its final level) at a time where most of its ports struggled to bring the PC version's experience to a console, while competing with the likes of GoldenEye 007 and Turok: Dinosaur Hunter with their advanced 3D graphics on the Nintendo 64.

For many years, Doom 64 did not see a release on other platforms, and with Midway Games filing for bankruptcy in 2009, the chances of the game being re-release elsewhere seemed uncertain, however, there were efforts by Doom modder Samuel "Kaiser" Villarreal to port Doom 64 to PC unofficially, starting with his Doom 64: Absolution project, a total conversion of Doom II: Hell on Earth, followed by Doom 64 EX, a port that runs off data extracted from the original Nintendo 64 cartridge. Samuel along with fellow Doom modders Edward "Edward850" Richardson and James "Quasar" Haley went onto to work for Nightdive Studios and developed an official port of Doom 64 with a partnership with Bethesda.[2] It was initially announced for the Nintendo Switch to accompany the then-upcoming Doom Eternal, originally slated for a November 22, 2019 release until they was delayed to March 20, 2020 but announced versions of Doom 64 for PlayStation 4, Xbox One, and PC. The game was released on the planned release date (through Bethesda.net and Steam), and features many quality-of-life improvements such as support for higher framerates, widescreen resolutions, an updated HUD message system, as well as a new set of levels that ties the storyline of the classic Doom games with the modern Doom (2016) reboot.[3] The official re-release of Doom 64 also features haptic controller feedback on all versions, a first for the KEX Engine. A GOG.com version was later released on June 23, 2022 followed by an Epic Games Store release on August 18, 2022.

Bethesda sought to end their partnership with Nightdive Studios after Doom 64 was finally released, thus preventing any further updates or fixing overlooked issues such pixel-scaling distortion caused by the PC version's stock DirectX 11 shaders and inability to remap key bindings on non-QWERTY keyboard layouts. Samuel has provided players with workarounds to address issues with the DirectX 11 shaders. Almost 2 years after Microsoft's acquisition of Bethesda, Nightdive was able to return to the work on the game and provided players with a patch to address the most glaring issues with the game.[4]

Granted to pre-orders of Doom Eternal.
The game's Official Soundtrack and 20th Anniversary Extended Edition Soundtrack are available for purchase or streaming via the composer's Bandcamp page.
The Bethesda.net release is no longer available as the Bethesda.net Launcher was retired as of May 2022. Users who own games in their Bethesda.net Library will be able to transfer their games to their Steam account for free, even after the launcher is officially retired.

Background music on Level 20: Breakdown (Track name "The Rotted Foul" according to Doom 64 Official Soundtrack listing) plays differently in comparison to the Nintendo 64 equivalent, with some samples playing too fast or at too high a pitch. Level 21: Pitfalls background music (Perfect Hate) also has minor differences starting around the 0:30 mark.[6]

The copyright screen and photosensitive warning will still be displayed. 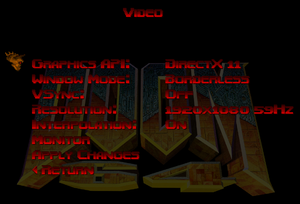 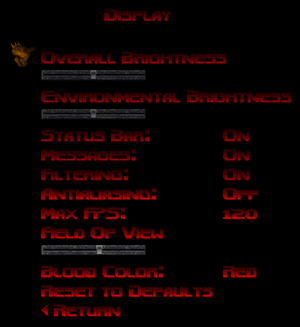 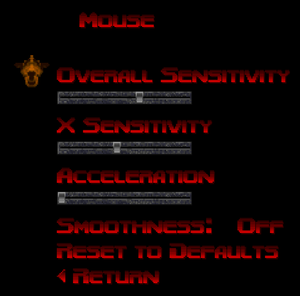 In the GOG release of the game, this option has been changed to seta r_force_interpolatedanglereset and is set to 1 by default.

A patch for the KEX Engine remaster that aims to restore and emulate features from the original Nintendo 64 version of the game. Can be downloaded here.

The red cross symbols on recovery items were altered in this re-release.

The Doom 64 EX Compatibility Patch is a patch that converts the game files of Doom 64 into a format that the fan-made port from 2008, Doom 64 EX, can recognize and play. This allows owners of Doom 64 to make use of the added features of the fan-made port, such as enabling mouse look, disabling auto-aim, etc.