The support for supplementary features like the internal speaker, headphone jack, gyroscope, or lightbar varies between models, type of connection, and games/software.
Supported natively by a growing list of games (see support in games) while also featuring native DirectInput support.
Capable of making full use of Steam Input due to many overlapping features with the Steam Controller.[1]
Uses standard[2] USB (Micro-B) and Bluetooth HID protocols for communication...
...but exposes advanced features over the latter only via the custom PS4[3] mode. For the moment, only working with the official adapter.
Lacks native XInput support, requiring the use of a XInput wrapper (see Windows) for games that do not support DirectInput or the controller natively.

Use with PC platforms

The controller does not support XInput natively; additional third-party software such as Steam or an alternative (Windows, Linux) might be required to use the controller in XInput-only games.
Some older games works only with DS4 V1 controller and don't support V2 controller or don't work with wireless connection through Bluetooth dongle. DS4 V1 emulation helps to fix the issue. 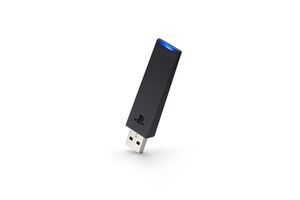 Official peripheral; required if using PS4 Remote Play or PlayStation Now wireless.
Games with native controller support may not work with the adapter even if they work with a wired connection.
Installs itself as an audio device and allows the use of the 3.5mm jack on the controller for audio passthrough.
Recognized as a DirectInput controller while plugged in, regardless of whether an actual DualShock 4 controller is paired with the adapter or not. This can cause issues with games incorrectly assuming a controller is connected when there isn't.
Only a single controller can be connected.
Can be expensive compared to using generic Bluetooth receiver to connect wirelessly.

Windows 10 has native drivers. When the DS 4 is plugged in for the first time, Windows 10 automatically installs it as a DirectInput gamepad with the name "Wireless Controller". All buttons are tested to work under Windows "Game controller settings". The headset audio device is also installed. When the DS 4 is plugged in, the Windows audio playback device is automatically switched to "Headset Earphone (Wireless Controller)".

Acting as native DirectInput controller, it's possible to use any of the generic wrappers. See the controller article for those.

Xbox controller emulation support.
A gyroscope and various modes of its operation are supported - mouse emulation, joystick-mouse and driving.
Easy to use, minimum settings
Support for only one controller.

Bluetooth 2.1 + EDR or higher required for wireless connection.
Extensive program with high amount of customization. Can be used as XInput, keyboard and mouse wrapper with macros or just as an extend of the controller to use controllers features like touchpad, gyroscope, haptic feedback and lighbar.
Ability to emulate DS4 V1 controller which can help with older games that don't support V2 controller or don't work with wireless connection through Bluetooth dongle.
Does not currently support/recognize Bluetooth adapters with chips manufactured by Cambridge Silicon Radio (CSR) of which there are many.
The integrated headphone jack and speaker are not supported.
The headphone jack can only be used via USB and only with a DS4v2 (native gamepad function, unrelated to DS4Windows)
The headphone jack can only be used wirelessly if the controller is connected via Sony’s DualShock 4 Wireless USB adapter

Emulate mouse moves on touchpad.
Possible to set mappings to tap and tap with click for touchpad.
Allows emulate virtual Xbox 360 controller to play XInput compatible games.
Lightbar shows when the battery is Critically low.
Not possible to map change of lightbar's color by pressing buttons.
Not free of charge. 14-days trial.
The site is closed for the countries of Russia and Belarus
Custom configs for DualShock 4 controller can be found in official Community Configs Library maintained by reWASD users.

This is caused by controller showing up as two, first as the native, "real" controller (the DirectInput device) and second as the emulated (virtual) controller, which can be the Xbox 360 Controller or also another DualShock 4 version 1.

Earlier known as DS4Tool and DS4Windows, not to be confused with current DS4Windows.
Ad supported donationware.

Controller is natively supported since kernel 3.15.

Light bar support may require additional tweaks. For games using the FNA engine, refer to the engine article; for other games, refer to the game-specific articles for details.

On macOS Catalina (10.15) or later, Bluetooth support is available natively.[9]

Capable of making full use of Steam Input due to many overlapping features with the Steam Controller.[1]
Double inputs, games with native support might see the controller as an Xbox controller.

Wired or wireless works. Press the PlayStation+Share to power up to be detected by Steam Link. All buttons are mapped correctly.
Works without any drivers on any operating system that supports Steam.
Can be used just to send input from a controller to a PC. Go into Streaming options, hit △ and disable video and audio streaming.
Won't work great unless you connect it to LAN or a low latency Wi-Fi. 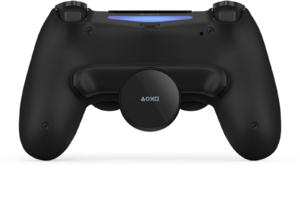 DUALSHOCK 4 Back Button Attachment with gamepad.

Works perfectly fine on PC. Attachment translates their inputs to Dualshock 4 signals what makes attachment compatible with every device which supports DualShock 4 controller.
Fully configurable - 16 different functions to map to the Back Button Attachment and save up to three profiles.
Easily programmable - scrolling through every button combination on a compact digital screen and possible to assign them with a single button press.
Unlike Xbox Elite controller, Paddles cannot be rebinded by any software as attachment is not sending its own signals, just simulate existing ones.
Share button cannot be mapped to Paddle what may affect some PC configurations where Share is still treated as Select button.

Games with generic DirectInput support are supported by the controller, however button placements may be out of place and need to be rebound. Refer to game-specific articles for rebinding support.
Supported natively by a growing list of games, allowing the use of the controller and some/all of it supplementary features without any additional software installed.
Support for some controller features may be only available on certain systems. Refer to game-specific articles for details.

Like for DualSense controller, every game which allows to select separate playback audio device for specific sounds will be supporting controller's built-in speaker, eg. Death Stranding's BB voice audio can be assigned to controller's speaker when other sounds are played from other audio device.
Feature is still in development. See more.
Number of games which split audio channels and letting assign them to different audio devices is limited and controller's speaker support is still not a PC standard.

For a list of games, see List of games that support tracked motion controllers in non-VR gameplay.

Thanks to JoyShockMapper, Steam Input, reWASD application, gyro control can be remapped to mouse or right stick in any game.
Number of games which natively support motion controls is limited and gyro support is still not a PC standard.

Touchpad is placed on the front of the controller, the capacitive type touchpad is a clickable 2-point touchpad with a resolution of 1920x900. The functionality of the touchpad can differ from between games. Recognized gestures: zoom, swipe, pinch and scroll.
Thanks to Steam Input, reWASD or DS4Windows application, touchpad can be remapped to mouse or right stick in any game.
Number of games which natively support touchpad controls is limited and touchpad support is still not a PC standard.

Total number of games: 1,110.
Please note, that this is only list for games that offer DualShock button prompts.

This is caused by using a XInput wrapper with a game that natively supports both DualShock 4 controllers and XInput devices, causing the game to use both the actual hardware and the virtual XInput controller at once.

This is most likely caused by game being designed for XInput controllers only, but still taking inputs from DirectInput controllers. What this means is that game is reading Dualshock 4 controllers shoulder axis which are not centered as right stick.
See the controller glossary page for more information.

Worn analog sticks are a known issue and Sony should've changed rubber material for new controllers.[12] If the controller is still under warranty contact Sony or the retailer for replacement instructions.[13] Worn sticks can also be replaced manually (follow this guide).