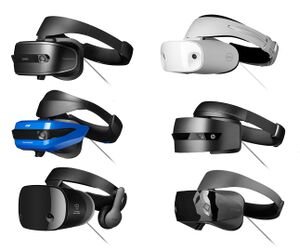 Key points
Includes a headset and two wireless controllers.
Motion controllers require a PC or a USB adapter with Bluetooth 4.0 connectivity.
Requires a workaround to play games that are designed for the Oculus Rift. See Revive.

Windows 10, and a Microsoft account is required to download the Mixed Reality Portal from the Microsoft Store.

Installing this compatibility layer is required to run SteamVR on Mixed Reality headsets.

Each headset uses an accelerometer and gyroscope to track headset rotation, and uses inside-out tracking for room-scale motion tracking and controller tracking.

Each headset excluding the Dell Visor uses a proximity sensor to check if the headset is being worn.

Each controller features a trigger, touchpad, analogue stick, a menu button and a system button. They are tracked via the headset's inside-out positional tracking cameras.

The HP Reverb G2 replaces the touchpad on each controller with two buttons, and uses a different layout for the analog stick, system/menu buttons, and grip buttons.

When the controllers leave the headset's positional camera's FOV, they are no longer tracked, but do still use gyroscope and accelerometer information to estimate the controller's position.