Heretic: Shadow of the Serpent Riders is the retail release of the game, adding two extra episodes.
The Steam version is not available in Germany, but the GOG and Bethesda Store versions are.

Note that H!ZONE is not compatible with source ports or modern computers due to it using a DOS program to overwrite the base game's data rather than loading as a WAD file; it overwrites episode 3. A fan made remake of the addon for zdoom and derivative is available at this thread.

Disable mouse in settings then run this. Source for hack available here.[2]

Soundtrack for Heretic recorded on an authentic SC-55 for use with a ZDoom based engine. Choose either OGG or FLAC; MP3 does not support proper looping.

Soundtrack for Heretic recorded on an authentic Roland SC-D70 for use with a ZDoom based engine. Choose either OGG or FLAC; MP3 does not support proper looping.

The following wads are designed to fix some game data bugs or feature shortcomings of the game. They do not add any levels/change play style and thus are generally compatible with most user addons.

A freely redistributable replacement of Heretic-like assets is available at Blasphemer, forming a completely free and open source game. Art assets from the original game such as the levels, sounds, textures, etc., remain under copyright. They can be purchased from Steam or copied from an original game disk. 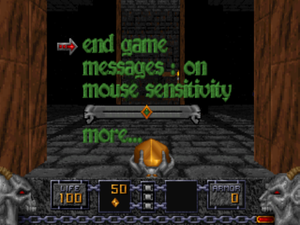 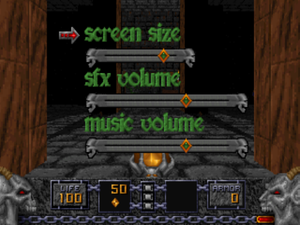 Depending on your choice of engine, you can usually change the field of view with a console command, or even in the options. Try fov <1-179> or gr_fov <1-179>.

A source port is recommended for online play as it adds modern networking support and simplifies the process of finding games. Most major source ports (like Zandronum) also increase the max player limit (for Zandronum, the limit is 64)