The game's graphics engine was made open source in 2008, making the game very mod-friendly
The CD soundtrack lacks some songs from the MIDI soundtrack and repeats tracks

A demo is available here.
The Steam version is not available for sale in Germany. However, the GOG and Bethesda Store versions are available.

Disable mouse in settings then run this. Source for hack available here.[1]

v1.1 patch for Hexen updates the game to the latest version.
v1.1 patch for Deathkings of the Dark Citadel adds support for MIDI music.

Soundtrack for Hexen recorded on an authentic Roland SC-D70 for use with a ZDoom based engine. Choose either OGG or FLAC; MP3 does not support proper looping.

Deathkings of the Dark Citadel uses the same tracks as Hexen and doesn't require another music pack.

The following wads are designed to fix some sort of game data bug or a feature short coming of the game. They do not add any levels/change play style and thus are generally compatible with most user addons. 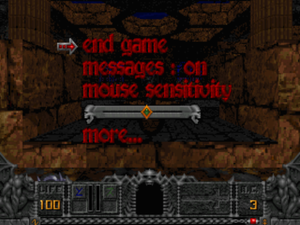 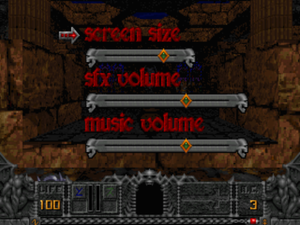 Depending on your choice of source port, you can usually change the field of view with a console command, or even in the options. Try fov <1-179> or gr_fov <1-179>.

A source port is recommended for online play as it adds modern networking support and simplifies the process of finding games. Most major source ports (like Zandronum) also increase the max player limit (for Zandronum, the limit is 64)