Based on the International Zodiac Job System version of Final Fantasy XII, which overhauled the original game's character-development system and added numerous quality-of-life improvements.
Features support for 60 FPS gameplay, 21:9 aspect ratios, and multiple-monitor setups.
Exclusive to the PC version are boosters (developer-programmed built-in cheats) which maximize LP and gil, as well as the ability to play both New Game Plus and Minus without having to first finish the regular game.
Received game patch to v1.0.4.0 on 24 April 2020 via Steam which adds most new gameplay features from the Nintendo Switch and Xbox ports of the game[Note 1] and removed Denuvo Anti-Tamper DRM.[1]
Enabling Full Resolution Ambient Occlusion may have a significant performance drop on many GPUs.[2][3]

The Day One Edition, available only during February 1–8, 2018, also includes three audio tracks, an exclusive wallpaper, and a 20% discount.
The Collector's Edition is a version that comes with a download code for the game, a steelbook containing the game's soundtrack, a set of five Judge-themed busts, and six art cards.
Complete version feature differences between PC and other platforms as well as Steam patch history are available on the Final Fantasy Wiki page. 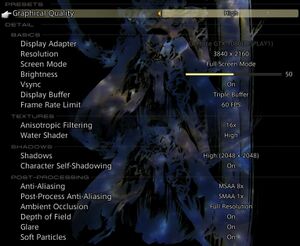 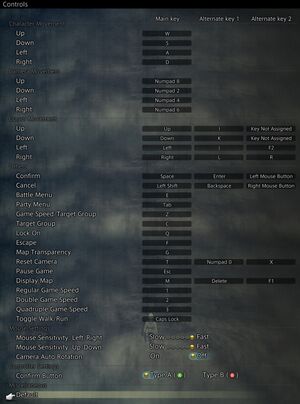 Keyboard settings. Some commands can be bound to up to three different keys, while others can only be bound to one.

Crash on launch with "A fatal error has occured" (Windows 10)

There are many potential issues causing this error, however this fixes one of them.

A 64-bit Windows OS and compatible hardware/drivers are required.

[citation needed]Any AMD Legacy Driver will have very low framerate even if met the minimun System Requirement, it was patched on a Driver update from AMD.