Unlocks the developer console, giving access to console commands and easy changes to the game's CVars, along with allowing loose INI files to be loaded in from the game's config folder. 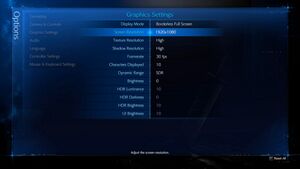 Depending on FPS cap, the game utilizes dynamic resolution. It can be set manually using Flawless Widescreen.

Square Enix may have inadvertently released a debug version of the game that ordinarily should not be accessible to the public. This could be the cause of the many PC-specific issues. There is no word from developers if this will be corrected at this point in time.[6]

The game's frame rate can drop from 120 FPS to below 30 FPS when texture settings are set to high on a GPU with 8 GB of VRAM or less. This may be caused by poor VRAM management, as the issue is resolved by alternating between low and high settings. This appears to force a VRAM flush. There is no word from the developers about the issue at the time of this edit.

When using the in-game FPS limiter, the game can introduce poor frame pacing. It also presents data streaming issues that can be easily reproduced.[7]

There is no word from the developers about the issue at the time of this edit.

The frame pacing issues can be greatly alleviated by using any VRR technology (such as HDMI VRR, G-Sync or Freesync). This won't help with data streaming issues, however.[8]

Some controllers (e.g. DualSense) do not function correctly over Bluetooth if they are powered on and connected prior to launching the game. The game does not always recognize the type of controller when connected via Bluetooth. This will result in generic, difficult to parse, numbered button labels in-game. It will also require you to rebind all of the buttons on the controller, as it will by default automatically bind only the d-pad, accept, and cancel buttons in this scenario.