Has a different MIDI compared to the PSX version of the game. Can be replaced with FF7Music.
While the PlayStation version ran at 60 FPS, excluding menu screens the PC frame rate is capped at 30 FPS, 15 FPS during combat and FMVs, breaking the combat camera as well as some menu mechanics. 60FPS BATTLES mostly alleviates the combat situation.[2]
FMVs are from the 320x224 resolution used on the PlayStation.[3]

The official 1.02 patch fixes various bugs and is required for running the game on modern Windows.

Required by modern versions of Windows to view FMVs in-game, the screen will remain black during the FMVs otherwise.

A fan-made mod pack with a host of tweaks and fixes.
Not compatible with 7th Heaven.

A mod manager that allows downloading and installing enhancement mods.
Allows use of the custom video driver FFNx via downloading through the mod manager, allowing the game to be ran through a variety of rendering backends such as Vulkan.
With the 60/30 FPS Gameplay mod, true 60 fps can be achieved throughout the whole game including the overworld.
Not compatible with The Reunion.

You can improve performance by running the video files directly from the hard drive.

Renders the game with OpenGL and enables rendering at higher resolutions with other options. Also avoids graphical issues and artifacts with some modern GPUs. There are two methods of installation:
Make sure your GPU drivers are up-to-date as the default Windows GPU drivers have poor OpenGL support.
Introduces some bugs into the game, and currently has a small black bar at the bottom.

With modern versions of Windows it may be in HKEY_LOCAL_MACHINE\SOFTWARE\Wow6432Node\Square Soft, Inc.\Final Fantasy VII\1.00\Graphics which takes precedence if both registry keys exist. 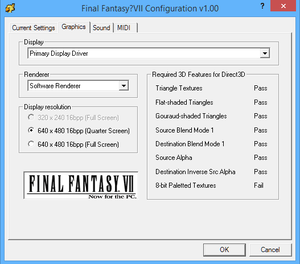 No in-game mouse support.
Uses the numpad for keyboard input. 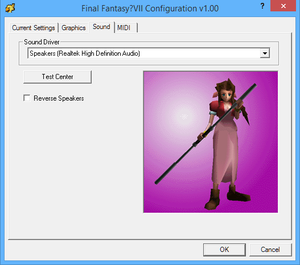 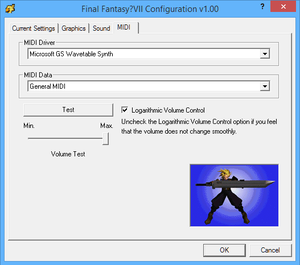 Modern versions of Windows will need the TrueMotion 2 codec to view the FMVs.

If you have graphical issues or artifacts, use Aali's custom driver.

Running from an ISO or another drive

By default the game uses the drive it was installed from for CD checks. If you wish to use another drive (common when using an ISO), edit the registry: