Based on the International editions of Final Fantasy X and Final Fantasy X-2, which added additional content to both games.
Players can only skip some FMV cutscenes in Final Fantasy X, no way to skip in-game cutscenes and certain FMVs. In-game cutscenes and FMVs can be skipped in Final Fantasy X-2 and Last Mission.
Compared to the PS2, some artistic changes are implemented to the characters. For example, Tidus and Yuna have reshaped faces (which some players feel reduces their facial emotional expressions), Yuna's hair is sometimes darker, Wakka has a more muscular back, etc. While some changes are harmless, some players may dislike some of these aspects. Some texture mods have been made to alleviate this, although the underlying polygonal structures can't be edited.
New to the PC version are various boosters to control the rate of enemy encounters and speed up battles, among others (see below).
This release adds an auto-save mode; all three games are now saved in a separate slot when entering another area (X, X-2) or ascending one floor (Last Mission).
Frame rate is capped at 30 FPS. No way to change without breaking the entire engine.

If severe stutter is experienced, turn the Reduce stutter option off by changing Reduce=true to Reduce=false in the main configuration file.
To disable the on-screen display (yellow text in top-left corner), press Ctrl+⇧ Shift+O.

A gamepad- and UnX-friendly launcher replacement

Separate save files for each game. 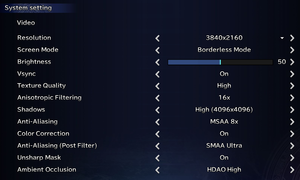 These games have different aspect ratios for outdoor and indoor scenes. Using this SUWSF.ini file, outdoor scenes (and in-game cutscenes) will have a proper (Hor+) 21:9 image while indoor scenes will have a zoomed/cropped (Vert-) image in order to avoid stretching the original 4:3 backgrounds. This fix supports all of the included executables, not just FFX. 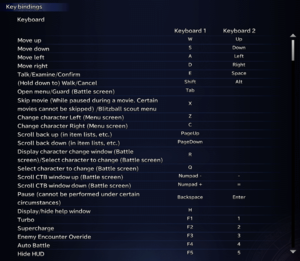 Choose between original or rearranged music in Final Fantasy X.

Unable to play while offline

The update released on March 3, 2019, introduced a Steam API bug that prevents the game from working while in offline mode of Steam. This update was later reverted on March 27 when the developers were made aware of the issue.[6]

The game comes with five exclusive modifiers, or "Game Boosters", to alter gameplay. By default, pressing F1 - F5 will activate them; they can also be remapped.

The game also comes with three cheats (or "Parameter Changes") that can be accessed via Esc. Note that these cheats will be permanently activated for the save game it was used on, and may trigger some achievements (as they aren't disabled when these are turned on).

In Last Mission, only the Max Gil booster is available.