Quake is a singleplayer and multiplayer first-person action and shooter game in the Quake series.

Originally released for MS-DOS, patches were later released for the MS-DOS version to take advantage of compatible 3D accelerator at the time.
Official source port for Microsoft Windows includes WinQuake which utilise DirectX 3.0 and visually identical to software-rendered MS-DOS version. And GLQuake, a fully 3D accelerated version of the game using OpenGL.

The engine is open source with modern multi-platform ports available; see Source ports for more information. However the game utilised mixed-mode disc for data and CD soundtrack, which can be problematic for modern systems. See below for fixes.

Quake: The Offering includes the base game along with the two mission packs.

Mission Packs No. 1 and No. 2 are no longer available for purchase individually on Steam as they are already included for free with Quake (2021) and bundled with the original DOS version as of the August 19, 2021 update.[5] For Steam owners of the individual Mission Packs prior to August 19, 2021, it is recommended to uninstall them to avoid having redundant files and re-validate the integrity of the base game as they can launched through the base game's launch options.
Several unofficial add-ons were also released. Full list available here at the Quake wiki.

Since the release of the Quake engine's source code, various engine overhauls and source ports have been created to enhance or modify the game in different ways. Which one to use is a matter of taste.

To install a source port, extract it into the same folder as the vanilla executable and run the modified engine's executable.
QuakeSpasm, QuakeSpasm Spiked, or vkQuake are recommended for authenticity to the original game's features and maximum mod compatibility. DarkPlaces is recommended for graphical enhancements. Quake "Epsilon" is an all-in-one modernized version.
QuakeSpasm and vkQuake have native support the Kex Engine remaster's game files.[6][7]

More information can be found here.
The opengl32.dll files must be deleted before applying the patch.
The source port included uses an outdated version and the Scourge of Armagon soundtrack is badly ripped.
Patches for the Mission Pack can be found below:

An alternative patch to the above that aims to fix compatibility issues with GLQuake and WinQuake through dgVoodoo 2, restores the missing in-game soundtrack in MP3 format while using a modified version of winmm.dll for proper music looping, custom autoexec.cfg files to enable mouselook and crosshairs, and includes QWSVLaunch and Simple Quake Launcher to ease launching the game.

A Java-based client for the Quaddicted single player map and mod database that runs on Windows, OS X and Linux. It provides the ability to install and uninstall maps and mods (with their requirements/dependencies) from the site directly on Quake with a single click and includes information about each mod, such as release data, rating (from the Quaddicted editor), title, authors, a brief description (from the editor) and screenshots. Also it can (with varying levels of success) find out if there are known maps already installed. Quake Injector however does not provide access to every map released for Quake (it has no support for multiplayer maps, for example, unless they come as part of a singleplayer map pack or they are singleplayer maps in addition to multiplayer), but it is very close to that and provides an easy method to try new maps and mods.

Please note that under OS X and Linux, many older maps will need manual editing of their filenames because the original files contained mixed case or upper case letters.

A small Quake launcher that provides an easy front-end to running any user map or original map by scanning Quake and mod archive files (PAK files) and displaying all maps to select from. It can also be used to supply default variables (such as FOV values) and screen resolution when starting the game.

A simple ZDoom Launcher-inspired front-end launcher for Quake, Quake II, Hexen II, and Half-Life that offers ease of use for launching each game and their source ports, auto-detects maps and demos in .pak and .pk3 formats, displays map titles, launching demos, and create desktop shortcuts using the currently selected options.

The opengl32.dll file included in some releases of the game is a 3dfx-specific MiniGL wrapper. It should be deleted on systems not using 3dfx cards unless GLQuake is being wrapped with nGlide (included in the GOG.com release), as it's highly recommended to prevent issues on modern system or when using a source port.

12 save slots for the main campaign and mission packs are available. Some source ports such as QuakeSpasm can offer more save slots. 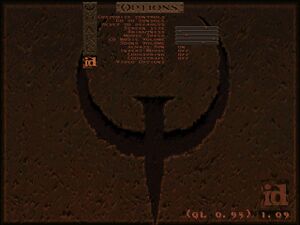 To set mouselook to always on, add +mlook to autoexec.cfg. crosshair 1 puts a plus sign in the center of the screen as a crosshair.

Some digital distribution releases of the Quake either have not properly configured music playback in the game without the original discs in a CD drive or has no music at all.

The GOG.com version of Quake in Software Mode (via DOSBox) is already pre-configured to mount the game's disc images for the base game and its mission packs.

Due to legal reasons, the in-game music in .ogg format has excluded in the GOG.com version for GLQuake and WinQuake, but it can be restored.
The in-game music is missing for the digital version of the original Quake (unless you play the DOSBOX version on GOG), it is only included for the Kex Engine remaster.

A majority of these console commands only applies to GLQuake or applicable source ports. These commands can be either entered into the console or written into an autoexec.cfg file to be executed automatically upon launch.

A project that aims to fix issues and errors leftover in the main game and its two mission packs while remaining faithful the game's original features. See here for details.

A model replacement project that enhances the models of the main game and its two mission packs while remaining faithful to their original appearance. Can be downloaded here.

This Program generates .lit and .dlit files, which contain colored light information to enable most modified Quake engines to display the classic Quake levels with colored lighting (.lit) and allows the engine to use bumpmapped/glossmapped wall textures without turning on real-time world lighting (.dlit).