Installing the Windows Live application is mandatory to install the game but not necessary to run it. See Essential improvements for a workaround.

Steam version DRM switched from Games for Windows - LIVE and SecuROM to Steam.
All non-Steam versions require Games for Windows - LIVE DRM.[Note 1]
All retail product keys activate on Steam (Games for Windows Marketplace product keys do not work).[1]
Retail version owners can use the LIVE key to activate the Steamworks version. Also, the LIVE version is available to Steam version owners who miss the features removed during the transition to Steamworks or who use mods incompatible with the Steamworks version by using the code G4WLOriginalVersion in the game's properties' Betas tab.[2][3]
New Steam version update removed DirectX 10 (although this has no impact on performance or graphical features[4]) and Nvidia 3D Vision support.[5] It also removed the Split-Screen code and introduced some minor bugs.[6]

Based on the patch made by Maluc and updated by RICK to provide more fixes.
Removes GFWL requirement. Fixes the region lock and allows you to join/see any multiplayer server. Gives weapon to AI, fixes versus bugs, etc. 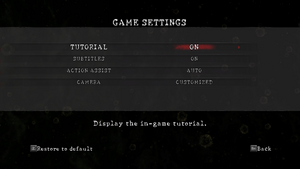 When trying to move/backup save games in the GFWL version, including the folder %LOCALAPPDATA%\Microsoft\XLive\ is essential. This folder needs to be restored back to the same location. 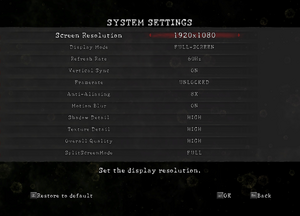 Works with the Steam version only. 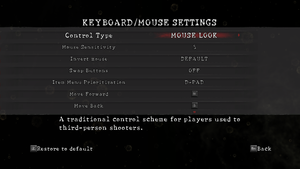 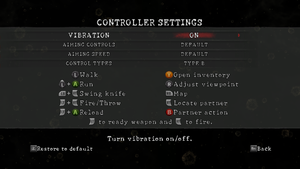 When mapping a button which already is mapped to another function, a warning will show up, informing the player that the controls may not work properly. To solve this, just either unbind the other function or preferably just remap it to another unused button.

original and DualShock 3 variants available for both Steam and GFWL versions of the game. 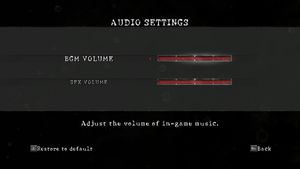 This application enables split-screen coop in any version. While it is only playable with gamepads, it is possible to use a keyboard via PPJoy.
A video tutorial is available here: https://www.youtube.com/watch?v=JFFq8ECXHhM

https://github.com/ZeroFox5866/nucleuscoop/releases/tag/v1.0.2 Download it, run it and download the RE5 script, choose a split mode using the interface, then click > followed by PLAY at the top right.

Official support for versus mode is included with the Untold Stories Bundle DLC.
This mod enables versus mode in the GFWL version, which also was left in the game's code.[15]

Issues with Games for Windows - LIVE[edit]

See Games for Windows - LIVE Issues fixed.
As of Steamworks update, game does still require GFWL components to be installed so users are able to import their save game data and achievements, even though it isn't used with main game.
Launcher errors, such as res = 1, err = 0x0000007e and res = 1, err = 0x00000012, are GFWL related and is possibly linked that there's no GFWL related data found.[16] Game should still work normally,[17][18] but as window requires manual closing it breaks full controller compatibility and may get irritating.

In chapter 6–1, sometimes the Majini with a key card can't jump down after spawning and you can't kill him to get a key card.

This flickering can occur on modern graphics cards and drivers, popping up as frequently as several minutes or as infrequently as every couple hours.

Crosshair can be replaced with laser sights when playing with keyboard and mouse.

Removes unnecessary HUD character names and dark circles around health.
A version compatible with the DualShock button mod can be found here.

Disables the notification when you switch between controller and keyboard and mouse.