Resident Evil 4 Ultimate HD Edition is a third-person action horror shooter game developed by Capcom and ported by QLOC. It is an updated version of Resident Evil 4.

The Ultimate HD Edition of Resident Evil 4 was developed in response to the poor quality of the initial 2007 PC port from Sourcenext. This port was based off the 2011 HD version of the game on Xbox 360 developed by AQ Interactive, which in turn was based off the 2007 Wii edition with the extra content from the PlayStation 2 port.[1] It also features alternative color filter options, some improved HD textures, keyboard and mouse support, and the ability to play the game at 60 or 30 FPS. The game, however, is originally designed around a 30 FPS cap, and various issues, both minor and major, can occur when playing at 60 FPS; see Issues unresolved for details. Mouse controls are also a hit-or-miss; some players reported the mouse aiming worked fine while others experience issues such as slow mouse movement and unresponsiveness, possibly to the extent of being unplayable.[2][3][4] A controller is recommended in situations where mouse controls are not playable. Unfortunately, the low-quality PlayStation 2 FMV sequences are also carried over in the Separate Ways campaign and a few other scenarios in this port.[5] There were some other issues initially with this port, but some of them have been addressed with patches.[6][7]

There is a modding community for this version of Resident Evil 4 after moving from modding the previous 2007 PC port. One of the most ambitious projects available is the Resident Evil 4 HD Project, which completely revise the game's models, textures, environments, lighting, effects, and FMVs. re4_tweaks also aims to fix and restore other small features of the game.

Fixes issues with the UHD release and restores features from the original GameCube version that were broken when ported over to the Xbox 360 release, which this port is based on. Features include restored depth of field in cutscenes and sniper scope, removal of a broken filter that gave some areas of the game a brown tint, restored sniper scope blur, raw mouse input, allow turning character with mouse, option to skip intro videos, fix QTE speeds, remove the film grain filter, restore the cinematic camera for the Ashley segment, subtitles for the English language and more.
Features an in-game overlay menu to configure its options, accessed by pressing F1.
Included with Resident Evil 4 HD Project, though updates for the re4_tweaks module can be found on GitHub (may require deleting old re4_tweaks files or it will crash).

Resident Evil 4 HD Project is a mod aiming to revise the textures of the game. It intends to be very faithful to the original look, as the creators even went to the real-life European locations to capture photos of the art and architecture. It also re-does effects such as lighting so that they make more logical sense, while fixing some of the environmental problems leftover in the game.
Supports v1.0.6 and v1.1.0. A clean installation of Resident Evil 4 Ultimate HD Edition is recommended before installing this mod.

Some settings are tied to the game's save file.

Save file is tied to the player's Steam account.
re4_tweaks allows making use of savegames across different accounts/game versions. 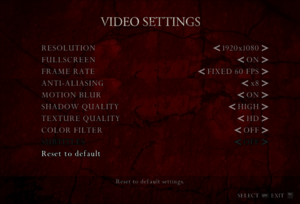 Vsync is forced on by default.

It is recommended to set in-game brightness to the maximum level. Any value below that will make the whites look like bright gray. Lowering the brightness does not give out more detail, only a duller image.[13] 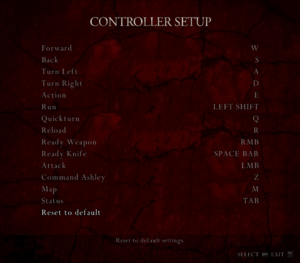 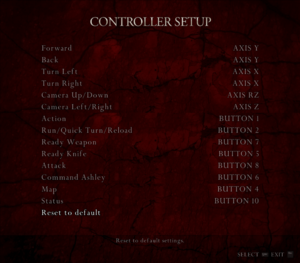 These mods recreates the controller configuration of the GameCube and PlayStation 2 versions or a custom PlayStation 3 layout with relevant prompts when played with an XInput controller. See this forum post for more details of each alternative controller configuration.
Not compatible with Resident Evil 4 HD Project.[17] Bingo's updated versions for HD project 1.0 can be found here. Links for PS Button layout for original controls, PS2, and Gamecube.
NEGAARMAX's controller prompt mods for HD project v1.1 (requires re4_tweaks v1.7.7.3 or newer): Xbox One, PlayStation 4, Switch Pro, GameCube (Switch).

Issues when running the game at 60 FPS[edit]

Various issues, both minor and major, can occur when playing at 60 FPS due to the game being originally designed to play at a 30 FPS cap. Issues when playing at 60 FPS includes the following:
The re4_tweaks mod mentioned above solves a few issues with 60FPS, such as the speeds of certain animations, and features improved aiming via RawInput & improved controller deadzones.

If you are playing the game and it suddenly slows down, load the map and exit.[citation needed] Alternatively, lock the game's frame rate to 30 FPS if your system cannot maintain stable 60 FPS gameplay.[28]

Some players have reported problems using the mouse to aim their weapon.[2][3][4] This can potentially be improved by changing the aim mode to "Modern" and adjusting the sensitivity level. Locking the game's frame rate to 30 FPS can help stabilize the player's aiming.[23]

The game may have a 5 frame stutter every 5 seconds or so, no matter the video options, essentially making the game unplayable.

Some QTEs, such as the minecart and the statue bridge, were not re-timed for 60 FPS, so they require twice as many button presses in the same time frame.[29][30]

Crashes after ~15 minutes of gameplay[edit]

This mod is for those who dislike the default color filters. The in-game brightness options can also be raised to give the desired effect.
The Resident Evil 4 HD Project includes color gradients that differ from this mod, and its default gradient is designed to resemble the GameCube/Wii version.

A legacy mod that removes the film grain effect present in the game while adjusting some of the shader effects.
re4_tweaks comes with its own optional toggles for disabling the film grain and fixing the Shaders without modifying the game files.
Now is compatible with the DualShock button mod, Just download this variant.

Backing up the vanilla 07000000.pack and 07000000.pack.lfs files is recommended before removing the film grain effect manually. The procedure may differ if you are using mods.

This mod replaces the stock in-game weapon models with their higher poly equivalents seen in the Examine screen. Backing up the game's original Em and ImagePackHD folders found in <path-to-game>\BIO4 is recommended before installing this mod.
This mod will crash the game when switching from the HD textures to the original textures after installation.

v1.0.6 added the ability to customize the laser sight color by editing the RGB values.