Saves can be imported from Mass Effect (see Import Mass Effect saves).
In-game graphics options miss half of the actual settings, which are tacitly set to the lowest quality on any modern GPU.

For some time now Origin will overwrite any installation of the game,[2] including Steam, with a stand alone client independent version of the game with all bought DLCs. Authorization for the DLCs still is dependent of ingame login but it'll work without Origin or Steam.
All of the DLCs are available in a bundle on Origin, bypassing the Bioware Points. Steam and retail versions can use separate installers to access them for free (direct links are provided below for convenience).

Patch 1.03 is a cumulative update. The Origin/Steam versions are already patched. 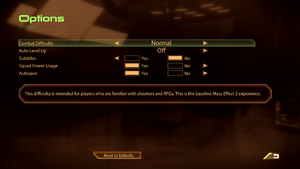 DLC files are saved in <path-to-game>\BioGame\DLC\; an explanation of the folder names and which DLC they represent can be found here.
Game can lose saves when the %USERPROFILE%\Documents path has been customized[5][6]

Many other settings can be adjusted inside Coalesced.ini.

For the folders used for importing saves see Mass Effect.

Importing saves can be done through MassEffect2Config.exe
The save importer may not work. In this case, move your Mass Effect saves into an ME1 folder inside your ME2 saves folder.[7] 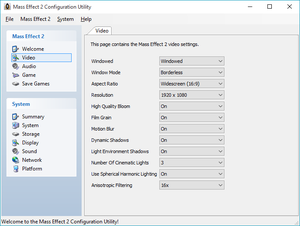 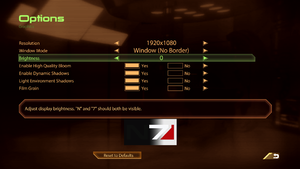 This method involves Coalesced.ini file. Make sure you have understood what this means. 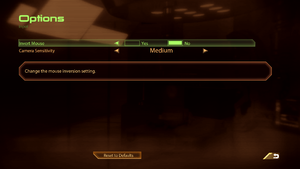 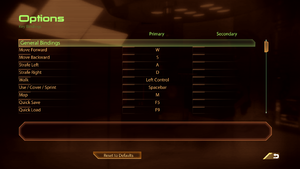 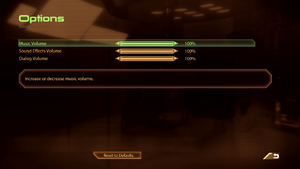 This method involves Coalesced.ini file. Make sure you have understood what this means.

In most cases the problem is caused by incompatibility with the video or audio drivers of the user's computer.

The freeze happens,Walking through the ground level corridor, that connects to the other side of the map, under Liara's office may cause a black screen and CTD.

Crash during vehicle chase on Illium[edit]

In most cases the problem is caused by incompatibility with the video or audio drivers of the user's computer.
The crash happens,At the end of the taxi chase with Liara on Illium, during the cutscene, the game freezes completely showing either a frozen image or a black screen while the music continues.

Issue may still persists after all of these have been done

Crash when entering the galaxy map[edit]

No sound even though it's On in the Configuration Utility[edit]

Unable to save any more games[edit]

This can potentially happen if you force AA from control panel

Selection Circles on Characters and Interactables does not appear[edit]

You most likely had A Lot of Textures (ALOT) applied to the game in the past. Apply it again or use one of the fixes below.

Some of the fixes for this game require you to modify this special file, but editing it in the normal way will cause the game to crash.

Split the all-purpose Use key functions[edit]

Some of the post-processing effects can be disabled in the game's GamerSettings.ini file. These effects include light bloom, and motion blur.

A longer list of options that can be added and altered under [SystemSettings] can be found here.

A Lot of Textures is a re-texture community project that brings extra details for the game, replacing around 1200 textures with high-resolution variants.
MEUITM2 updates textures & alternate character appearances, + more visual goodies for ME2. Works and is best used with ALOT. Must be installed ONLY after installing ALOT.