Origin version includes all DLC (existing Origin owners can install the latest update to get the DLC).
Separate installers have been made free and are available for other game releases

The latest patch is update 1.02 which fixes various issues. The Steam and Origin versions are already patched.

Fixes bugs not resolved by the official patches 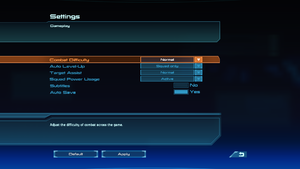 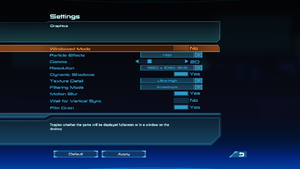 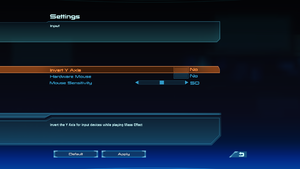 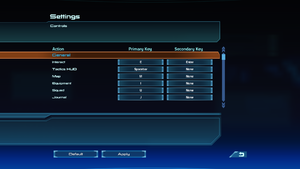 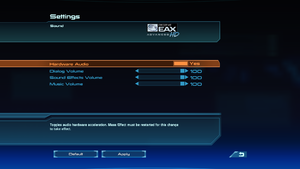 Some menu screens have sides "cut off" on 4:3 screen resolutions[edit]

Playing in 4:3 resolutions like 1600x1200(useful for non-widescreen monitors and projectors) results in some menu screens displaying incorrectly: the left and right hand sides of the screen are clipped (as if "zoomed in" too far), so important information cannot be seen (like journal details and the map legend). Screens affected include: Map, Party Selection, Planet details, and Journal. Currently the only known fix is to use a 16:9 screen resolution when playing, like 1920x1080.

This is also responsible for Steam Controller and Steam overlay not working.

Crash after ~5 minutes of play (NVIDIA)[edit]

If you receive a "General protection error" crash after a few minutes of play (duration seems to depend on settings/mods used), and you're using an NVIDIA card, the cause seems to be NVIDIA's driver config for MassEffect.exe.

If when you get to Therum most of the ground is black, then you've got a common texture problem. Some of the black area is safe to drive on but some of it will kill you outright, making it quite hard to navigate.

No audio at all (menu or ingame)[edit]

Dialogue and other audio cutting out[edit]

Improves stability on 64 bit systems with at least 3GB RAM by allowing the application to use more than 2GB RAM.

A Lot Of Textures (complements MEUITM)[edit]

A compilation of textures not covered in MEUITM. Regularly updated, applies LAA, and texture bioengine.ini tweaks automatically for the user (very user friendly).
MEUITM can be installed through ALOT.
Install all non-texture based content/mods (such as the free DLC or the ME1 Controller Support mod) before ALOT.
The installer can break other games using PhysX versions before 2.8.4. See here to undo damage (make sure to inhibit any additional change too).

Regularly updated, applies LAA and texture bioengine.ini tweaks automatically for the user. Has mod options (picking different versions of textures) optional installs of ReShade, Indirectsound, and more (very user friendly).
Can be installed through ALOT.
Install all non-texture based content/mods (such as the free DLC or the ME1 Controller Support mod) before MEUITM.