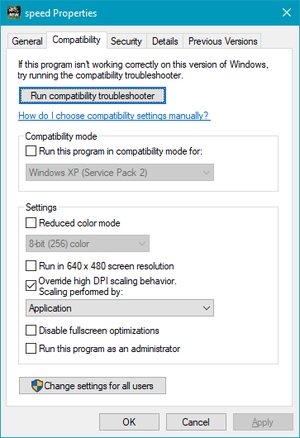 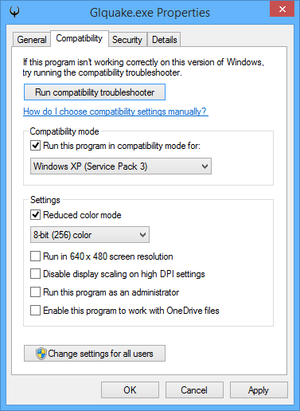 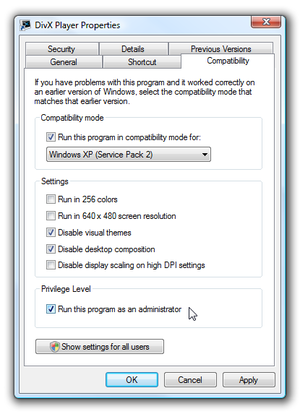 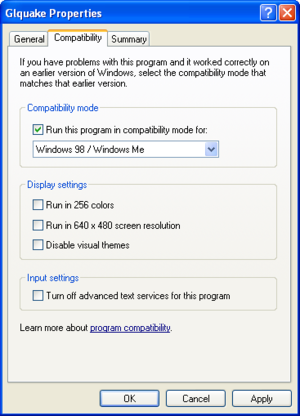 Note that compatibility settings will not fix problems such as missing DLL errors or rainbow colors. Refer to their respective pages for further details.

Try enabling this setting and choosing a Windows version that the game was originally designed for. The versions listed will vary somewhat depending on the version of Windows that is currently being used as well as the CPU architecture of the game (32-bit/64-bit).

As of Windows 10, here are all the possible options:

Try choosing the appropriate mode when running 256-color and 16-bit games. This is also useful for games that run correctly without this setting but warn about too many colors; enabling this setting will skip the warning.

For Windows 7 and earlier, 16-bit color can be used by changing the desktop color depth before running the game.

Replaced by Reduced color mode for Windows 8 and later

Note: Beginning in Windows 8 onward, this setting does not actually switch the color depth; it merely tells the game it's running in that depth without actually changing. As such, if the game absolutely requires 8-bit color to actually function (most notably if it uses palette cycling animation or fades that do not work above this depth), this will not solve the problem.

This sets the Windows resolution to 640x480 before launching the game.

Stops visual themes built in to the operating system from affecting the game.

This prevents automatic resizing of programs if large-scale font size is in use. To disable display scaling in Windows 10, tick the "Override high DPI scaling behavior." and choose Application option in the dropdown.

Only applicable for Windows 10 v1703 and later, as previous versions did not include those fullscreen optimizations.

This prevents the use of Windows 10's built-in fullscreen optimizations for games running in exclusive fullscreen mode.

Run this program as an administrator[edit]

Automatically applied when the compatibility mode is set to Windows XP or earlier.

This setting makes the application run as an administrator, which is required for some older games. It is also possible to work around issues caused by separate third-party injectors by using this option, as those third-party injectors will be unable to inject themselves into the game if they are running without elevated privileges.