Far Cry 3 is a singleplayer and multiplayer first-person open world, FPS and action game in the Far Cry series.

Some users have reported the game only being able to run when installed on the C: drive.
Performance on multi-core systems may be improved significantly by changing core affinity. See Issues fixed.
Online services shut down on October 1, 2022. Some DLC enabled before this date remains accessible.[1] 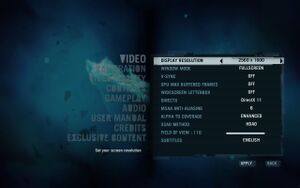 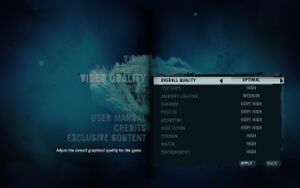 Depth of field, FXAA, and motion blur are all combined under the "Post FX" graphics setting.

Ambient occlusion can't be fully disabled through the in-game settings under DirectX 11, only switched between the different techniques available (SSAO, HBAO, HDAO). 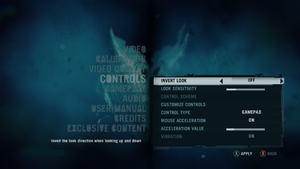 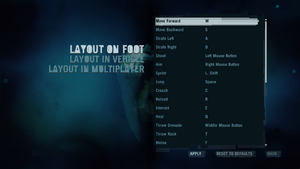 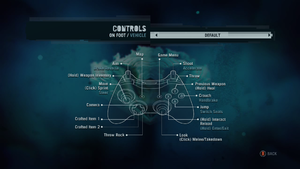 The sensitivity slider might be too high, even in the lowest setting (specially on high-DPI mice). 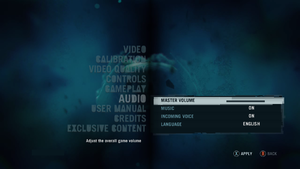 Crashes can randomly happen in all parts of the game.[17]
Crashes are more frequent after first -unskippable- cutscene.[18]

There are many places in the game, where shadows flicker while moving the camera. Mostly observed on the grass and vegetation.[23][24][25]
Changing settings or API doesn't seem to affect the issue

These forms of V-Sync can reduce micro-stuttering.[26][27]
Capping the framerate in RTSS or Nvidia Inspector can cause a visual bug that makes NPCs shake/twitch randomly to happen more frequently. Use the in-game v-sync option to cap your framerate instead as a workaround.

The game reports the wrong button for opening a parachute when jumping with a wing-suit. There seems to be a link between the Crouch and Switch seat keybindings. Make sure that these actions are bound to the same key.[32]

Multiplayer weapons will not level up[edit]

Crash when installed in a Windows 8 Storage Space[edit]

Full replacement of the Xbox gamepad button-prompts (including QTEs) with the official DualShock 3 ones, ripped from the PlayStation 3 version of the game.