64-bit version is available for separate download. See Patches.
Water reflections are broken on Windows Vista and later. Use SilentPatch on modern systems.

A free demo is available here.

Patch v1.4 (32-bit only) - The latest patch available for the game. On non GOG versions, a bug you may encounter is that the AI can see you through walls and kill you, use Unofficial 1.41 to fix it)
64-bit Upgrade Patch - Upgrades the game to take advantage of 64-bit architectures, allowing for higher frame rates and other optimizations. both 64 bit patches are NOT intended to be installed over the latest 1.4 patch (which all digital versions include), the effect this could have on gameplay is completely unpredictable.
64-bit Enhanced Content Patch - Adds exclusive features such as higher resolution textures and objects as well as increased viewing distances in some cases. 64-bit Upgrade Patch required. Game may exit may to desktop on Rebellion level near lighthouse. You can finish the fragment using 32 bit binary - saves are cross compatible.

The GameFront link has game and PunkBuster server info as well.

Fixes issues with AI, bugs and other stuff founds within the 1.4 patch.
Serve as a replacement to the official patch.

Fixes AI seeing through tents.
Standalone version of GOG fix. (Is not required for the GOG version due to a hotfix added.)

Integrates Unofficial Patch 1.41, SilentPatch and Tent AI Bug Fix. Can be selected during setup.
Widescreen support for FarCry, from 4:3 up to 48:9.
Fixed FOV to prevent textures stretching.
Use the -mod:FarOut_Widescreen command line argument to launch modded version directly from Steam, once installed. This argument is absolutely required for FarOut Widescreen to work.

32-bit version can be found here.
Includes the 64-bit exclusive patches.
Adds Quick saving and loading (assigned to the F5 and F9 keys).
Includes widescreen FMVs.
Large file size due to included videos.
FMVs are from the console port, Far Cry Classic, which has altered levels. Cutscenes will have some inconsistencies with the PC version. 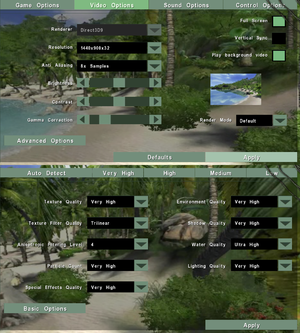 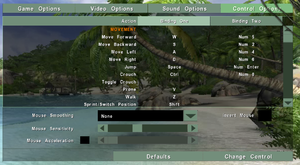 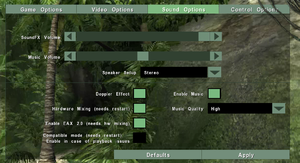 See the description of this video on how to reenable EAX 2 on non-Creative hardware for use with DSOAL; this allows OpenAL Soft HRTF to be used. May not work on some versions of Windows 10. DSOAL doesn't work with 64 bit binary. If you encounter sound disappearing after long gameplay using 64 bit, simply restart the game.

AI can see you through walls and kill you[edit]

The patch 1.4 (32 bit only) introduces this bug.
This has been fixed in the GOG.com version.

When setting the Lighting Quality option in-game to Very High you may experience a freeze every time you launch the game. This is easily resolved:

Reflections on water are broken by default in Windows Vista and higher. Foliage and other objects are reflected, but landmasses are missing altogether.[11][12]