Difference between revisions of "Team Fortress 2"

This game requires a constant internet connection for all game modes.
The macOS (OS X) version of this game does not work on macOS Catalina (version 10.15) or later due to the removal of support for 32-bit-only apps.

All versions require Steam DRM and a constant internet connection for all game modes.
A faithful higher resolution icon for Windows can be found on DeviantArt.

TF2's default settings are generally not optimized for most users. Therefore, it is generally recommended to use a performance config, such as mastercomfig. 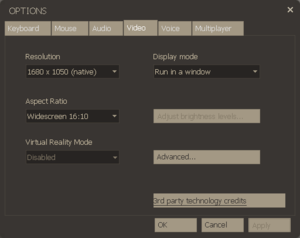 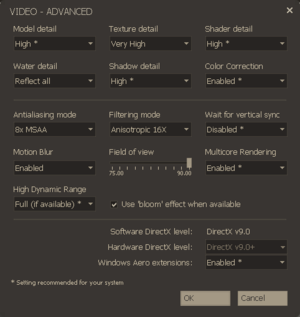 A FOV slider is available within the options which is limited to 75-90°, but this sets the FOV for a 4:3 aspect ratio. The actual FOV will be adjusted for other aspect ratios, meaning widescreens gain a higher than configured FOV, especialy for 21x9 and 32x9 aspect ratios. For a 16:9 aspect ratio, a setting of 90° results in a FOV slightly above 106. Adjusting the size of the window in windowed mode changes your aspect ratio. Console commands can change the FOV to values below & above the slider's range, but are not allowed in competitive. The viewmodel FOV can also be changed by the use of console commands.
The TF2 Tactics video on FOV has more information about FOV in TF2 and in general. 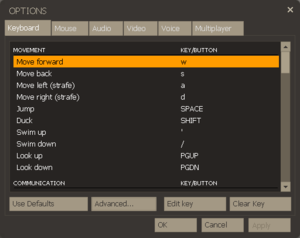 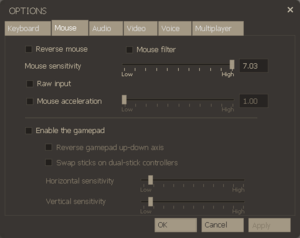 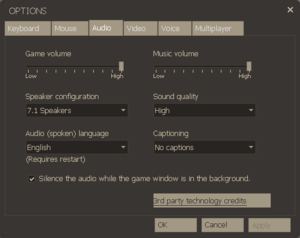 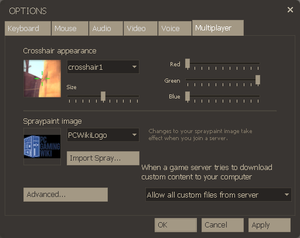 Sprays are not visible

Sprays are no longer available on official Valve servers and can be disabled per server by the server admins.

Cosmetic items do not appear on a player

Bug is caused by the dynamic-model-loading system implemented in Team Fortress 2.

Getting disconnected while playing on a LAN with multiple players

This is caused by multiple players trying to connect to a server using the same client port.

No Sound In Linux

Game does not start on ArchLinux

Caused by any user who inputs a Unicode symbol in chat

Mouse sensitivity is doubled than what was set in Linux

Caused by a Mesa driver bug

"List of useful console commands" - Official TF2 Wiki
Games running on the source engine can utilize Source Engine Console Commands for various tasks.
These commands can be saved into <path-to-game>\tf\cfg\autoexec.cfg to be executed when the game launches.

View this Steam Support Article regarding launch options as well as the relevant Valve Developer wiki page for further information and a list of useful Source engine launch options.
You can launch Team Fortress 2 with launch parameters - these parameters can dictate how certain aspects of the game behave.

DirectX 9 is required for Competitive Mode.[12]
Windows XP and Vista were previously supported, but as future updates for this game and Steam occurred; the support was dropped, even with retail copies.