For Windows 8 and later apply the fullscreen border fix.
Frame rate is capped at 30 FPS.

Tomb Raider II Gold (Tomb Raider II: Golden Mask) is a complete edition with four exclusive levels. This version is not sold digitally, however the levels were later released as freeware for those who own the base game.

The latest official patch 2.0 is available at www.tombraiderchronicles.com and at soggi.org.

Tomb Raider Mouse Helper is a utility which allows controlling Lara with the mouse. It also maps the WASD keys to enable a more modern, keyboard+mouse control scheme.

Real widescreen with the right aspect ratio and field of view
Deinterlaced FMVs
Hides the window border on windows 10 - Tomb Raider 2
Working audio for TR2 Gold and Lossless audio, instead of mp3, for TR2
Transparent inventory background
Better compatibility with Xinput gamepads
Allows use of the iOS version texture pack

Has all of the benefits of Peixoto's Patch and more.
Restores the animated inventory background of the PlayStation version.
Many other fixes like UI scaling, controls, graphics, sound, etc.
Manual explaining the Extra Options can be found here
Further information and guide on how to use texture mods in this forum post.

No CD/digital fix for Golden Mask[edit]

The Multipatcher doesn't include any fixes for Gold, unfortunately. 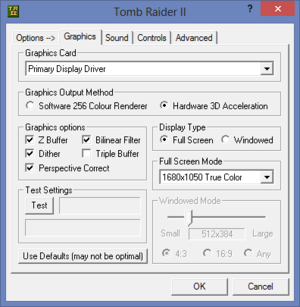 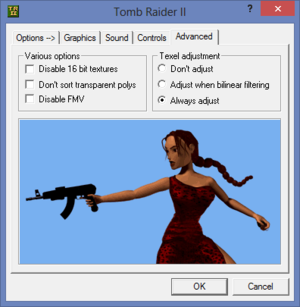 Tomb Raider II does not go fullscreen correctly on Windows 8 and later.

GOG.com version does not run[edit]

The GOG.com version of Tomb Raider II does not start, but keeps to run in the background.