For Windows 8 and later apply the fullscreen border fix.
Windows version ships with the Tomb Raider Level Editor (TRLE), which allows users to make their own adventures.
Frame rate is capped at 30 FPS.
Lacks the dynamic shadows of the Dreamcast version.

The GOG.com version is a complete edition. The Times - Exclusive Tomb Raider Level is part of the bonus content downloads. The level was later released as freeware for those whom own the base game, so Steam users aren't completely out of luck.

Not needed for GOG.com and Steam versions

A "flexible patcher" which unlocks many game hidden features

Patch Fix solves the disappearing Uzi and not being damaged by your own grenades bugs.
level patches corrects issues with Giza levels.
Times Patch fixes broken audio and animations in the exclusive Times level.

Tomb Raider Mouse Helper is a utility which allows controlling Lara with the mouse. It also maps the WASD keys to enable a more modern, keyboard+mouse control scheme. 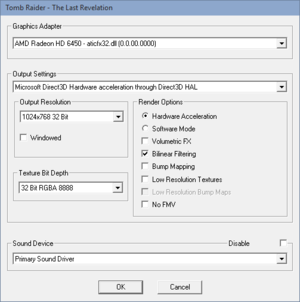 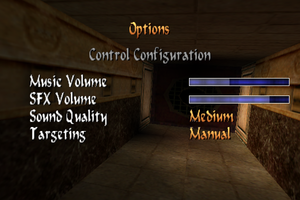 Tomb Raider: The Last Revelation does not go fullscreen correctly on Windows 8 and later.