Tomb Raider: The Lost Artifact is a mini-sequel bundled with certain re-releases of the main game (sold separately in the US) with five exclusive levels. This version is not available digitally.

The latest official patch is available at www.tombraiderchronicles.com and at soggi.org.
An unofficial patch that Fixes various issues in Tomb Raider 3 and its addon, as well as optionally removing the green health crystals for harder gameplay, is available here.
A patch for the level Costal Village's missing secret is available here (digital versions only).

Real widescreen with the right aspect ratio and field of view
Forced resolution allows high resolution without shrinking the HUD/menus (does not work properly in TRIII; HUD-elements such as health- and oxygen-bars still shrink with increased resolutions)
Deinterlaced FMVs
Hides the window border on Windows 10
Fixes a glitch in the title and 'loading' screens
Transparent inventory background
Better compatibility with Xinput gamepads

Tomb Raider Mouse Helper is an utility which allows to control Lara with the mouse. It also maps the WASD keys to enable a more modern, keyboard+mouse control scheme.

[1] Replaces original Menu and Textures with remastered ones. 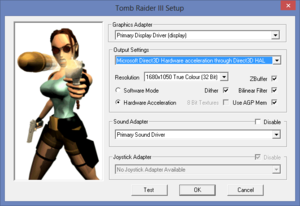 Some higher resolutions crash the game if used.

A decompilation project that, first and foremost aims to document and preserve the original source code and assets of the game, and secondly, aims to provide bug fixes and gameplay improvements in many sections of the game. Utilizes a .dll file to inject decompiled code into the executable.