For Windows 8 and later apply the fullscreen border fix (not needed for the GOG.com version).
Frame rate is capped at 30 FPS.
Lacks the dynamic shadows of the Dreamcast version.

SafeDisc retail DRM does not work on Windows Vista and later (see above for affected versions).
A free demo version is available from Archive.org.

TRNG is a fan made update to the game's included level editor with a lot more features than the original one.

A utility which allows controlling Lara with the mouse. It also maps the WASD keys to enable a more modern, keyboard+mouse control scheme.

After the first time launching the game, the launcher won't show up again and you will be unable to configure the settings. 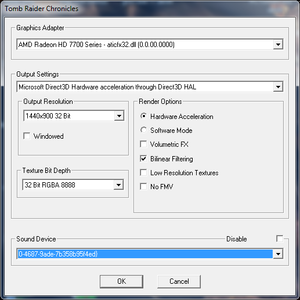 There is a save bug in the level 13, Red Alert!, that prevents you from proceeding to the next level. A workaround is listed here.

Caused by an incompatibility with the sound drivers,the only solution is to play the game disable audio from the game launcher which runs the game without sound but is not an adequate solution

Tomb Raider Chronicles does not go fullscreen correctly on Windows 8 and later.
The GOG.com version already includes this fix.
You can fix this issue downloading dgvoodoo install into TR5 Folder with the other Dll such as D8, D9 etc.

A decompilation project that aims to document and preserve the original source code and assets of the game, and also provide bug fixes and gameplay improvements in many sections of the game. Utilizes a .dll file to inject decompiled code into the executable.