Tomb Raider: The Angel of Darkness

Missing several effects and smaller features from the PS2 version and also contains flipped texture issues not present on that version. See below for fixes to many of these issues.
For Windows 8 and later apply the fullscreen border fix and set Windows 7 compatibility mode to fix save loading.

Latest build is v52. Use the link below to obtain the latest version. Digital versions are already patched.

Tomb Raider Multi Patch - Works with TR6 even though it only mentions TR2-5.

In order of release:

A large modpack compiled by LateRaider that adds many vanilla-friendly tweaks and quality-of-life improvements to the game. Improves the retail experience drastically. Combines many of the mods listed below into one package.

Massive project by reborninshadow seeking to restore/refine certain content in the game, as well as provide more clarity to story events. Includes unused dialogue, cut gameplay concepts, etc. Also features tweaks to the notebook to give more context to certain plot points, plus fix certain plot holes and inconsistencies where possible. Includes remastered textures provided by TRJTA to the notebook itself and certain in-game interfaces to actually show the relevant information. Should be installed last after either installing the modpack above or any of the individual mods below under Modifications.

Tank Plus Controls - Executable patch by LateRaider that aims to strip out the worst parts of the controls, namely the "walk-to-run" and tweaking Lara and Kurtis' base running speed to be at 100% rather than 50%, while still keeping the base control set exactly the same as retail. Also fixes the small hop "swerve" bug that makes the hop move in the last direction you turned to.
SLAYER's Ultimate Patch - The best level and cutscene files available with the least amount of problems.
Nakamichi680's Definitive Levels Patch - Fixes most flipped texture issues on objects. Install after SLAYER's Ultimate Patch.
Rewak's Tweaked FMVs - Ported from PS2 version and with colors adjusted. Adjusted by LoreTheGamer for widescreen resolutions and to reduce stretching.
Ending Credits Restoration - Restores missing credits present on PS2 version.

AOD Re-Added Dual Pistol Pickups Mod - Adds the iconic dual pistols back to AOD that were present in the game files and fully functional, but dummied out. Placed throughout the game as standard pickups. Included in TRAOD Restoration Modpack. 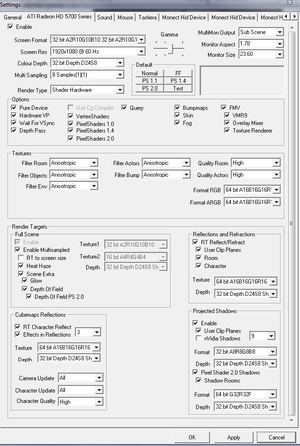 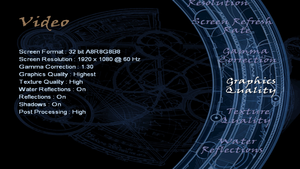 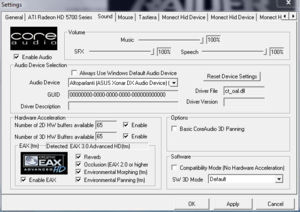 Crash on startup with "GAME_ERROR_STRUCTURED_EXCEPTION_HANDLE"[edit]

Saves can't be loaded on Windows 8 and later without some adjustments.

On Windows Vista and later, EAX is unselectable due to the removal of DirectSound3D. Re-enabling requires either older hardware with a dedicated Creative sound card, or emulation.

The Angel of Darkness' options panel in the Launcher has many options for tweaking the display quality in the game. Many of these are poorly documented and offer little explanation as to how each option will affect the game itself. The guide below will give you the best visual quality the game can offer. Credit goes to Maverin over at Tomb Raider Forums for gathering all of this information together.

To start, open the Launcher and go to Settings. Then go to the tab corresponding to your graphics card's name, which is where the graphics options are.

Shader Hardware - Offers the highest quality graphical output and is the most optimized choice, but has certain minor issues such as light texture flickering in certain places.

Fixed Hardware - Basically the same rendering process as TR1-5 on Hardware Accelerated mode, and has less issues than Shader Hardware, but turns off certain effects in-game so it will not be as visually appealing as Shader Hardware.

Software - If you are lacking in performance in-game, you may receive some minor benefit using this render type.

Monitor Aspect: Set this based on the table below according to your monitor's aspect ratio.

Gamma - Based on preference according to your individual monitor setup. Recommended to lower the default value slightly regardless, as by default the game's brightness is slightly above the halfway point so the contrast is a little too bright. Bring it down to the halfway point.

Options - Section with multiple tickboxes for different options. Select all of the ones you are able to. (If "VMR9" causes issues, enable/disable as needed as noted in "Issues Fixed" above.)

Render Targets - Multiple tickboxes. Select all of the ones you are able to.

Reflections and Refractions - Multiple tickboxes. Select all of the ones you are able to. (If using the "Heat Haze Effect Fix" from Nakamichi680's Multi-Patcher, enable Heat Haze. Otherwise, leave it off.)

Cubemaps Reflections - Check both tickboxes. In the dropdown menu next to the tickboxes, select the highest number shown. This corresponds to the number of reflections, and varies from system to system.

Projected Shadows - Check the tickboxes "User Clip Planes" and "nVidia Shadows". From the dropdown menu next to the tickboxes, select the highest number shown. This corresponds to the number of shadows projected by the game.

(Taking screenshots with User Clip Planes turned on will result in the game crashing when the Print Screen key is pressed. This setting only seems to be a small memory saver, thus it may not be necessary. If it causes issues, uncheck it.)

If the tickbox for "Pixel Shader 2.0 Shadows" is checked, uncheck it as having both enabled at the same time will cause the game to not render any shadows at all. It contains minor issues compared to nVidia Shadows, and are of lesser quality. If using an AMD graphics card you may still select nVidia Shadows, as the option is independent of hardware. Unchecking this option will disable the options below it as they correspond to Pixel Shader Shadows being enabled.