Lego Batman: The Videogame (sometimes abbreviated as "Lego Batman 1" or "LB1") is a Lego-styled action-adventure game loosely inspired by Tim Burton and Joel Schumacher's Batman movies and the 1992 animated TV series, with music from the 1989 Batman. The game is split into three independent stories, or chapters, with each chapter having 5 levels told from Batman and Robin's perspective and 5 levels from the villain's perspective.

The game was originally under development simultaneously with Lego Star Wars: The Complete Saga, but development was postponed to work on a Lego Indiana Jones game to tie into the then upcoming movie Kingdom of the Crystal Skull. Lego Batman would ultimately be released under four months later on 23 September 2008, running under the same version of TT Games's "nu2" engine as the original Lego Indiana Jones.

On PC, there is an active small but growing modding community for all of Traveler's Tales' Lego video games, based primarily around a Discord server. While The Complete Saga is the most popular Lego video game to mod, the original Lego Batman is considered to be a part of the unofficial "Holy Trinity of Lego Games" by modders (alongside The Complete Saga and the original Lego Indiana Jones), due to sharing similar versions of an engine that are easy to mod. As such, there are a small number of mods that add characters or fix developer oversights, most being published to the aforementioned server.

The Mac OS X version is no longer sold digitally.

By default, the cutscene that plays upon starting a new game uses a pre-rendered FMV. It is possible to render the cutscene in realtime instead by deleting the FMV video file. 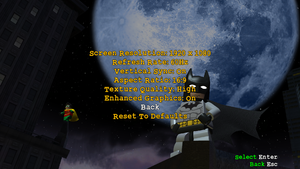 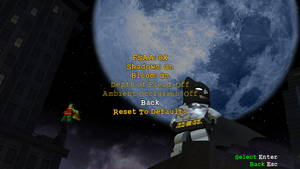 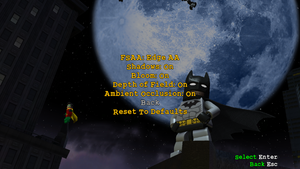 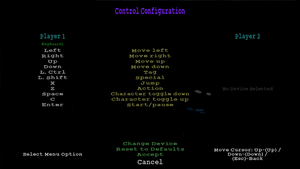 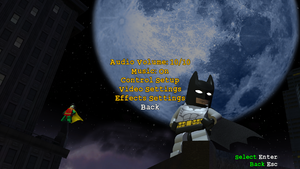 Vehicles (including Robin's RC toys) become unresponsive and won't move or work correctly. This is most noticeable in an early RC car section, where the RC car needs to climb on top of special buttons.[7]

Fullscreen mode defaults to 60 Hz for some resolutions, even if the screen refresh rate is set higher than that.

A gray, rectangular bar blocks the robot from reaching the innermost two pylons.

Some Windows 8.1 or Windows 10 Users had this game randomly crashes at moment.

The build of the game on the Epic Games Store has a bugged texture archive that causes the custom characters' textures to appear all black inside the customizer, even if the Silhouettes extra is disabled.[13]