The Heroes Pack and Villains Pack DLCs were never released for the PC version, although they can be modded into the game. 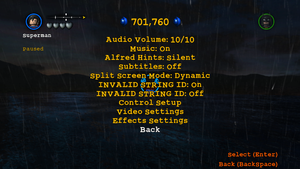 In the Epic Games Store build of the game, there are two extra options in the in-game options menu that only appear as the words INVALID STRING ID with an on/off toggle.
The first INVALID STRING ID controls whether the Y axis is inverted when flying.
The second INVALID STRING ID enables/disables the location icons on the compass.

A number of users have reported issues with the PC version of the game, whereby the anti-virus program AVG detects the dangerous Win32/Heur virus mid-installation.[8] This is a known false-positive, and AVG are aware of the issue.[9] Users of AVG can safely ignore the warning presented in this case.

Users with 3D capable Nvidia graphics cards may be unable to disable 3D Vision by unplugging the 3D adapter, or using the Nvidia Control Panel.[10] This issue can be resolved by pressing Ctrl+T in-game.

The Steam version automatically selects the system language with no way of changing it through the Steam client or in-game.

See the beginners setup guide for instructions on how to configure the game for mod support.[Note 2]
Setting up mods requires extracting the game's .DAT files, which noticeably increases file size.

The Heroes Pack and Villains Pack DLCs were never released for the PC version, but the files for them still exist, allowing them to be enabled by a simple text edit.
Included in the Expanded Character Grid mod, below. The following steps are not necessary if using that mod.