From PCGamingWiki, the wiki about fixing PC games
This page may require cleanup to meet basic quality standards. The specific problem is: Elaborate and accurately define fixes. See FO3 April 2016 edits for example. You can help by modifying the article. The discussion page may contain useful suggestions.

Fallout: New Vegas is a singleplayer first-person open world RPG shooter. The game is not a direct sequel to its predecessor Fallout 3, but follows events from Fallout and Fallout 2. The game was developed by Obsidian Entertainment and some members of the development team had previously worked on Fallout and Fallout 2 whilst working at Black Isle Studios.[1] The game shares much of its engine and assets as Fallout 3 and is also published by Bethesda Softworks.

The game's PC launch was considered "buggy as hell" by many critics and players.[3] However various official patches released until July 7, 2011, alleviated many of these bugs and performance issues.[4]

Fallout: New Vegas is primarily monetized by four DLCs which could be considered large story expansion packs, in addition to some microtransactions which contain time-limited pre-order unlocks like weapons and ammo. From February 2012, the game was released as the Ultimate Edition which bundled all DLC and microtransactions and is normally only available to purchase as a bundle on PC as of 2012.

Modding is well supported using the officialy provided toolkit Garden of Eden Creation Kit on Steam (in the Steam Library under Tools section), and players have produced mods which fix many of the issues with the game post-official support. The largest collection of mods are available from Nexus Mods and there is an extensive modding forum, and the game does not have Steam Workshop support.

As of 2020, the game has stable performance on PC.[citation needed] However it is recommended that players add some mods, in particular, YUP, FNV 4GB Patcher, NVSE, see Essential improvements for more information.

Ultimate Edition is the complete edition with all DLC.

DLC may need to be manually enabled in the launcher after purchase.

Decompresses the Fallout: New Vegas BSAs and repacks them without zlib compression for performance.
Transcodes the .ogg sounds effects to .wav so they work.
Extracts any .mp3 files to loose files because they will not play when in a BSA.
Updates Vorbis libraries, fixing an audio memory leak, sound related stuttering and boosts performance while reducing cpu strain.

Mod Managers simplifies mod installations, use one or the other.

Basic mod manager with a simple interface, good for beginners.

Powerful and easy to use mod manager with mod virtualization, in order to keep the installation folder clean.
Features a configuration editor, the NVSE executable can also be set to be launched through the configurator.

These should preferably be installed using a Mod Manager.

Fixes over a thousand bugs.

Requires New Vegas Script Extender.
Raises the game's 120 plugin limit to 255.
Can also cause an increase in fps, remove game stutter and allow for faster loading times especially when using a large number of mods.

Default settings are stored in <path-to-game>\Fallout_default.ini
The JIP LN NVSE mod adds a new configuration file along with FalloutPrefs.ini, that overrides any settings from both Fallout.ini and FalloutPrefs.ini. Makes changing settings much easier to track and manage.

Autosaves and quicksaves automatically create a backup (*.bak) of the previous save when overwritten. 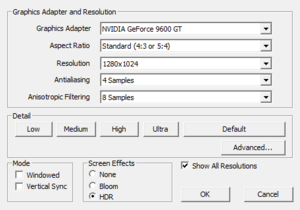 Suggested FOV values (with the assumption of default being good for 5:4):

By default, windowed mode only supports a limited number of resolutions.

Vsync is enabled at all times, even if the Vertical Sync box is unticked. This setting can be forced in the Fallout_default.ini file.

Enabling SSAO for all graphics cards[edit]

Note: The HBAO+ created by NVidia Profile Inspector is subpar and can break compatibility with ENB Series.
Use the Ambient Occlusion flag 0x00000003 with Quality or High Quality. 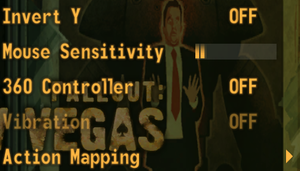 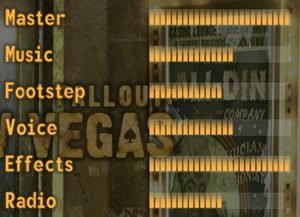 May require DirectSound3D restoration software to restore proper audio functionality on Windows Vista and later (Included in HRTF mod).
Creative ALchemy may cause the game to freeze and stop responding during the introduction with Doc Mitchell.

This is caused by conflicting character mods, this can usually be fixed with a compatibility patch or by using LOOT to fix the load order.

Setting "Actor Fade" to the maximum value should fix this.

Perpetual loading screen.
Sometimes attempting to 'load' a save game does not work.

Voice acting and Pip-Boy sounds (and possibly others) can not be heard, while the radio and movement can.

This happens when you start the launcher.

This happens when you start the game, and have mods that utilize NVSE (New Vegas Script Extender)

Character will continue to move or "slide" a bit sometimes even after they have stopped moving. Note that this should not be confused for the game engine forcing characters to take a full step when moving.

Affected data files are enabled at all times, even if their boxes in the "Data Files" menu are unticked.

If you chose to delete the .nam files, you can recover them by verifying the game data files integrity in Steam.

Occurs when launching the game in any other way than through Steam due to an inappropriate Steam AppID being used.
Can happen when you have a Polish, Czech or Russian version of the game.
Error code P:0000065432 may also apply when the AppID is incorrect.

Pressing the tilde key on the keyboard does not launch the cheat console.

Stutter when limiting FPS through ENB Series, NVSR, or driver[edit]

Viva New Vegas is a comprehensive Fallout New Vegas modding guide website which gets updated constantly and provides links to essential, stable and lore-friendly mods and how to install them.

This mod requires Fallout 3 Game of the Year Edition and Fallout New Vegas Ultimate Edition.
The mod is now in beta and is very stable.
Adds all the Fallout 3 content, including the world, quests, NPCs and items, into Fallout: New Vegas, and integrates the games to create a seamless experience.
Includes more than 40000 bug fixes to both games.
Can cause many conflicts with existing mods.

Fallout: New Vegas's textures upscaled using a curated selection of AI upscalers.
Authentic to the original textures' artstyle.
Has several known issues that slipped past curation. The author plans to correct these in future updates.

Requires all official DLC to be installed in order to work.
General difficulty tweak and bug fix mod by Fallout: New Vegas' Project director and Lead designer, Joshua Sawyer JSawyer Mod.
Contains crude editing and bugs, JSawyer Ultimate is a reconstructed version with fixes but strays heavily from the original mod and has it's own bugs.

One of the mod authors, MoBurma, has listed content which has been cut from the game due to time constraints.
Restores content cut from the game in a number of individual mods.
Some mods where indicated can be buggy and not function properly.
Mods such as Freeside Uncut require higher-end computers to perform optimally.

A massive mod that adds an all new story with hours of voiced dialogue, a new world, and multiple branching narrative paths. An Unofficial Prequel to New Vegas.