Fallout 2 is a singleplayer isometric and bird's-eye view RPG game in the Fallout series.

Fallout Classic Collection includes Fallout, Fallout 2, and Fallout Tactics: Brotherhood of Steel.
The digital release of the Mac version is actually a DOS version which uses DOSBox in order to play it, though the retail version was a true native port.

Patch v1.02 updates the game to the latest version.

Install one or the other; they are not mutually compatible.

A community patch that fixes over 1000 bugs with the game past the last official 1.02 patch.
Full list of unofficial patch corrections

A utility/patch that modifies the game in memory to add support for windowed mode, higher resolutions, and various other enhancements.
Included with the GOG.com and Steam releases.

Save games can be transferred between Windows and OS X installations of the game. 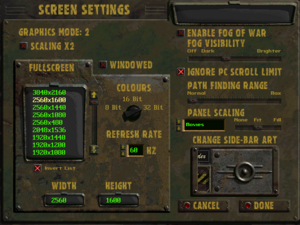 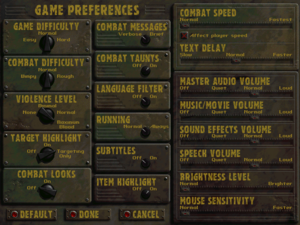 See DirectDraw troubleshooting for other solutions.

An engine modification for Fallout 2, allowing the base game to run correctly on modern operating systems.
Use D3D9 for rendering for a much improved compatibility with newer systems. Also allow to bind mouse wheel.
Adds additional features for modders.
Included with the GOG.com and Steam releases.
GOG.com and Steam versions use an outdated build.

A simple save editor for Fallout 2.
Compatible with mods.[2]

A character editor for Fallout 2.
Also known as Fallout 2 Character Editor v2.10.
Can edit your character stats, perks, skills and more.
Not compatible with the Restoration Project.

Allows nearest neighbor or xBRz scaling.
Supports the original DirectDraw renderer, as well as the DirectDraw, DirectDraw 7 and Direct3D 9 renderers of the HD patch.

An mod pack that add new content and other enhancements.

Use other mods and fan patches. Available in both English and Russian.
Add new locations and additional enhancements, including those from other mods and patches.

Compatibility requires skipping the install of included item.lst file inside \Data\Proto, use Restoration Project's version instead.

Restoration fix restores children and skilldex images to European and digital versions of the game.

A Fallout to Fallout 2 engine conversion that integrates Fallout 2's features into Fallout 1.

Port of Fallout 1 into Fallout 2 that can be played from start to finish.
Requires an installation of Fallout 2 and Fallout 1's MASTER.DAT.
Patches lots of bugs, has all the quality of life of Fallout 2 and associated Sfall version as well as the FO2 hi-res patch.
Has optional INI tweaks, including a motorcycle similar to the Highwayman, restoration of invasion timers, and more.