BethINI is a .ini optimizer that also works as a configuration utility. It has well-tested and optimized presets that could improve performance and fidelity.

Improves frame pacing, introduces texture caching system to reduce VRAM consumption, eliminates texture streaming bottlenecks and prevent memory fragmentation.
It is recommended to use an up-to-date version of Special K, since most of the settings described in the guide were added as core elements of it.[12]

Designed to reduce visual pollution on screen and have a tactical modern touch to it, it increases the immersive feeling while still maintaining useful features like mission markers and ammo.

This mod is a replacement for Bethesda's official 58GB Ultra High Resolution DLC. It contains only the best HD textures, and leaves out the rest. You will get the same image quality with this 6GB mod, and better performance, due to cutting out textures, which were only stretched from original resolution to 4K, without any improvements. 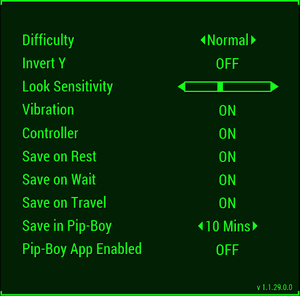 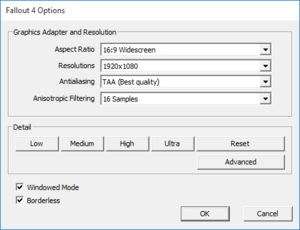 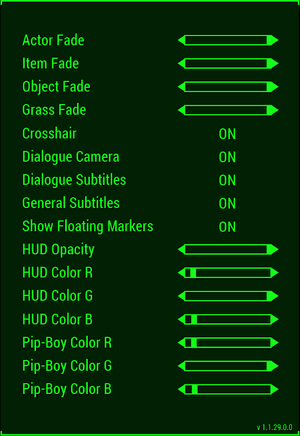 This is an "all in one" fix for mouse sensitivity. This is not just a dummy esp to load an ini. The esp is necessary and contains multiple edits to normalize mouse movement. This mod has nothing to do with vsync, fps limits or game performance in general, but if you want to read and try out my findings, head down to the optional performance section. 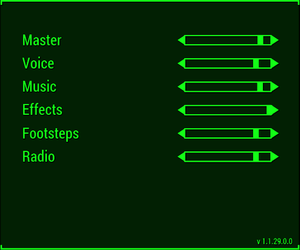 Crash to desktop during Hunter/Hunted[edit]

This issue blocks the continuation of a quest chain.
Approaching the quest objective will result in a crash to desktop without any errors. As of current, if you wish to progress the quest-line, you will have to teleport into the related building and then teleport to an area that does not crash the game.

This issue may block the continuation of a quest-chain.[23][24]
You may speak to characters inside the building if you enable noclip: open the console and enter tcl.
To exit the building afterwards, as the doors did not spawn in, you must teleport to another location, i.e. coc sanctuaryExt. 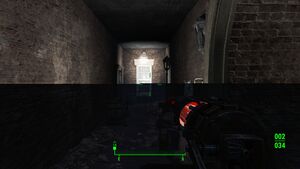 The default game does not support 21: 9 and 4k resolution, forcing it by modifying the game causes this problem. Even so, if you want to force 21: 9 resolutions and you don't want to have the problem with the shadows you must follow the steps described below. .[26][27]

Console not opening when pressing the tilde key[edit]

Mouse cursor not visible in menus[edit]

Brother Thomas unlocks the door to where Emogene is supposed to be, but she doesn't appear. Instead, the quest points back to Cabot House and the locked section of the house.

Powerful and easy-to-use mod manager with mod virtualization, in order to keep the installation folder clean.
Features a configuration editor, the F4SE executable can also be set to be launched through the configurator.