Fallout Classic Collection includes Fallout, Fallout 2, and Fallout Tactics: Brotherhood of Steel.
The Linux version of Fallout 1 is actually the DOS version which uses DOSBox in order to play it. It was exclusive to Desura store and it is no longer available. The same is also true for the digital release of the Mac version, though the retail version was a true native port.
A demo is available.

Patch v1.1 updates the game to the latest version. 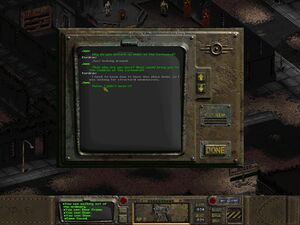 A utility/patch that modifies the game in memory to add support for windowed mode, higher resolutions, and various other enhancements.

Can also be downloaded as part of the Fallout Fixt mod compilation.
Included with the GOG.com and Steam releases.

Further details can be found in the official thread.

A mod that patched the game to enhance, expand and improve upon the Fallout 1 experience.

Patch compilation which contains several essential patches and bug fixes, allows for high and widescreen resolutions, and contains optional fan content.
Appears to be outdated compared to more recent mods, and has gone unmaintained for years.
Introduces gameplay changes, as opposed to just fixes, that change the vanilla experience - even when selecting the "Purist" option at installation.
Contains well documented bugs that can make progress impossible, and have yet to be fixed. [1]

Updating to the latest version of Crafty's Sfall is recommended as the included version is out of date. The latest version includes new bugfixes and optional features, set the following in the new ddraw.ini for compatibility:

Even the latest version of Sfall1 still suffers from several known crashes.

Save games can be transferred between Windows, Mac OS and DOS installations of the game. 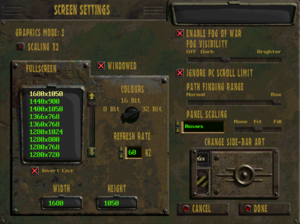 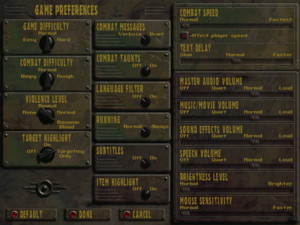 Use the fix below; if it fails see Rainbow color problems in older games for solutions.

The CD version of the game reports an error upon start-up if run on modern versions of Windows.

A character editor for Fallout.

Allows nearest neighbor or xBRz scaling.
Supports the original DirectDraw renderer, as well as the DirectDraw, DirectDraw 7 and Direct3D 9 renderers of the HD patch.

Port of Fallout 1 into Fallout 2 that can be played from start to finish.
Requires an installation of Fallout 2 and Fallout 1's MASTER.DAT.
Patches lots of bugs, has all the quality of life of Fallout 2 and associated Sfall version as well as the FO2 hi-res patch.
Has optional INI tweaks, including a motorcycle similar to the Highwayman, restoration of invasion timers, and more.

Child Patch restores child NPCs to the European and digital versions of the game.