Marvel's Spider-Man: Miles Morales is a sequel to the Marvel's Spider-Man Remastered. The game was developed for PlayStation 4 and 5 by Insomniac Games, while the PC version is being developed by Nixxes Software and published by PlayStation PC. The PC version improves in a variety of ways compared to the PlayStation 5 release, including improved ray traced reflections (improved resolution and improved complexity of geometry included in reflection), newly added ray traced sun and moon shadows, FoV slider, improved weather particle density[1], improved shadows[2], HBAO+, DLSS 2 and 3, FSR 2.1, XeSS, DLAA, ultrawide screen support and an unlocked frame rate.

The game released on November 18, 2022, two years after it was originally released for PlayStation 4 and 5 in 2020. On release, it was found that general lighting had changed compared to the PlayStation 5 version, which makes some scenes look better and others look worse by drowning out some texture detail.[2] The games' loading times were found to be longer than compared to the PlayStation 5 release.[1] The game also suffers from various issues where full-resolution textures don't always seem to load or only load in very late.[1] Additionally, in rare cases, some surfaces didn't seem to utilize ray traced reflection, while they do on the PlayStation 5 version.[2] Ray traced sun and moon shadows of vegetation can also look worse compared to rasterized shadows as the ray traced variant produces shadows from a lower quality vegetation object model without taking any movement into account.[1] Overall it was regarded as a PC port of high quality featuring good performance.[2][1] 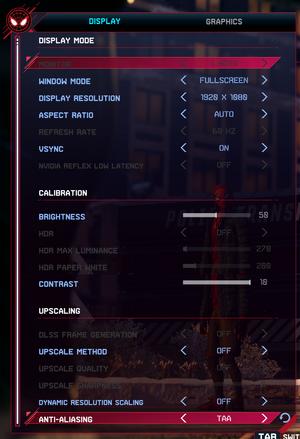 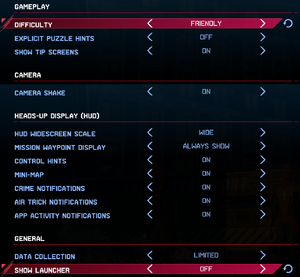 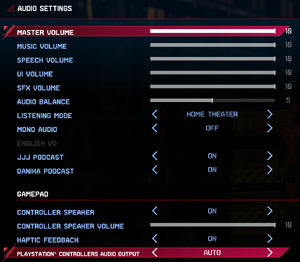 This is not an issue and an intentional and optional effect that is applied to the game when the user equips the Vibe the Verse Suit mod, that comes with the Spider-Verse Suit. This suit mod alters Miles's frame rate movements to match that of the film, and applies to all suits when the mod is equipped.

Happens when SMT (Ryzen) or HT (Intel) is enabled.[8]
The game seemingly can't efficiently use the logical cores available via the use of SMT/HT when the CPU has more than 6 cores, disabling it may increase CPU core utilization and improve game performance in CPU intensive scenarios.[8]
Disabling SMT/HT can severely impact the performance of games and applications. Strongly advised to turn it back on after quitting the game.
Currently unknown if developers are aware of this issue and if they are working on a fix.

The game suffers from an issue where some high resolution textures (for example on cops, armor and cop cars) don't seem to load in. The cause of this and whether the developers are working on this is currently unknown. There is no fix or workaround for this bug so far.[1]

After booting the game or loading a save, textures can take a while to load in. This is especially visible on buildings, where on a high-end system it can still take around 7 seconds sometimes to load in the full resolution texture.[1] There is currently no fix available for this issue.

Intel is aware of some graphical artifacts that can occur while using XeSS. Intel is investigating these issues and working on improving image quality in future versions.[10]