Based on the PlayStation 3/Xbox 360 version.
Frame rate is capped at 30 FPS. See High frame rate for details.
The PC port is missing several graphical elements such as bloom and motion blur from its console counterparts, as well as having a worse implementation of mipmaps, resulting in worse overall texture quality and visible lines that move along textures with the camera.[citation needed] See Visible mipmap lines on textures.
Missing New Green Goblin DLC from PlayStation 3/Xbox 360 version. See Switch playable characters. 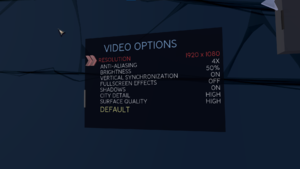 Due to a bad mipmap implementation, some filtering lines can be seen on textures (especially when wall-crawling on city buildings) that reduce the texture quality after each line.

Caused by minimizing the game. Use DxWnd to force borderless windowed mode. In this case, switching between windows will not cause sound problems.

While the game offers the option to replay most of the missions using the black suit, there is no actual New Game Plus option. If you want to play the game with all upgrades, you can use a modified save file.

Download the latest RaimiHook and put it in the "Spider-Man 3" game folder.