The GameSpy online server browser has been shut down. See Online play support.
Official mod tools available, as well as a wide selection of mods, which often support bots for co-op play.
Expansions do not work with the Origin version.

The Origin digital release is patched to v1.612.

After the shutdown of GameSpy, the community set up a new master server to keep the server browser functional.
Either download a modified executable or edit the hosts file to restore online functionality.

Support for the anti-cheat software PunkBuster in BF1942 has been discontinued by Evenbalance. Most servers do not have it enabled anymore,
as such it is recommended to move the contents of <path-to-game>/pb/ to a backup folder, to avoid any disconnects by its service.
If an up to date version is required however, follow the steps below. 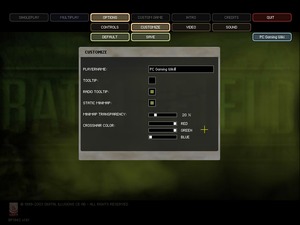 User-specific *.con is stored under Profiles\<user-id>\ in this location. 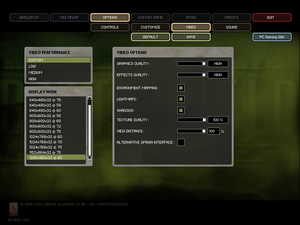 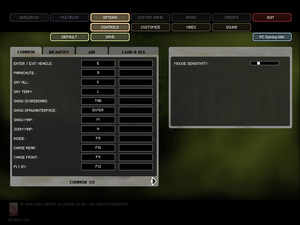 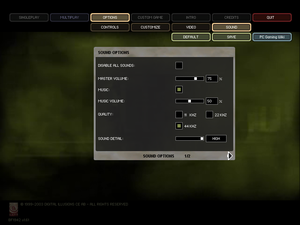 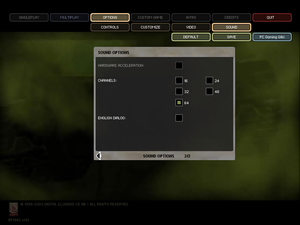 The console can be accessed by pressing ~. Below are some common commands, for a more extensive list visit the TweakTown Tweak Guide.

Mods are mostly compatible with the Origin version of the game. However, some installers may not work as they look for the retail installation path.

Desert Combat
This mod is set during the Gulf War and supplies an arsenal of modern weapons and vehicles, and many new maps.

Forgotten Hope
Forgotten Hope concentrates on adding both a more realistic and more enjoyable playing experience than the original BF1942 and includes many new specially designed custom maps to play in.

BattleGroup42
BattleGroup42 focuses on adding historically accurate equipment and battles to the game and includes many nations not included in the original game or expansions such as China, Greece, Netherlands and Hungary.

Battlefield 1918
A total conversion which takes place in World War 1 and includes many new weapons, vehicles and maps.

Eve Of Destruction
A mod based on the Vietnam war which later got releases for Battlefield Vietnam and Battlefield 2.

Realplayer AI
This enhancement mod will improve the AI on the standard BF1942 maps and includes some balance changes.

Graphics mod
Graphics pack for the game with remastered, higher resolution textures and other improvements.