This page is for the 2004 game. For Vietnam DLC, see Battlefield: Bad Company 2.

SafeDisc retail DRM does not work on Windows Vista and later (see above for affected versions).
This game is not available digitally. 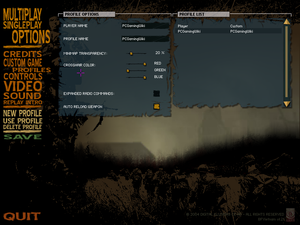 The latest updates bring Battlefield Vietnam up to version 1.21. This requires installation of:

Support for the anti-cheat software PunkBuster in BFV has been discontinued by Evenbalance. Most servers do not have it enabled anymore,
as such it is recommended to move the contents of <path-to-game>/pb/ to a backup folder, to avoid any disconnects by its service.
If an up to date version is required however, follow the steps below. 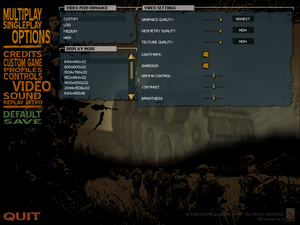 A method of Frame rate capping is recommended, as the game has no FPS limit and does not support Vsync by default.

Any form of widescreen resolution will, aside from a stretched HUD, cause a minor animation glitch when firing handheld weapons. 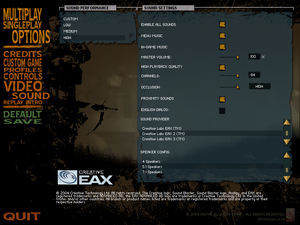 Surround sound is only available when using EAX as sound provider in the audio settings.

Battlefield Vietnam is missing some audio, like radio commands and vehicle music on all Windows os since Windows Vista. The fix below consist of lying about the windows version.

To play custom songs for the vehicle radios, place your own .mp3 files inside the folder <path-to-game>\My Music\ and they will become available in the radio menu.
Note that other players will still hear the default music even if they use the same songs.

The console can be accessed by pressing ~. Below are some common commands, for a more extensive list visit the TweakGuides.com Tweak Guide.

World War 2
Official modification by DICE which includes new maps, weapons and vehicles based on Battlefield 1942.

Point of Existence
A total conversion which is based on a fictional conflict between Russia and the US in the early 21st century.

Eve of Destruction
Additional content based on the Vietnam war.