From PCGamingWiki, the wiki about fixing PC games
This page may require cleanup to meet basic quality standards. The specific problem is: Outdated/404 links, etc.. You can help by modifying the article. The discussion page may contain useful suggestions.
This page is a stub: it lacks content and/or basic article components. You can help to expand this page by adding an image or additional information.

The Xbox Wireless Controller is a controller. Unlike PlayStation or Nintendo controllers, it does not have a gyroscope to support motion control. However, third party attachments can deliver this feature.

Controllers of this family can be used via wired connections (via micro USB on the models released for Xbox One from 2013 to 2020, or USB-C on the models released for the Xbox Series X and Series S from 2020 onwards) or wirelessly with Bluetooth (all models from 2016 onward) or the Xbox Wireless Adapter for Windows (supports up to eight controllers).[1] 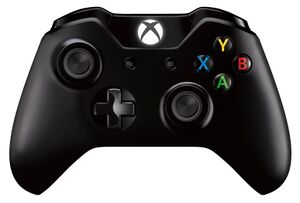 Original two models controller (Models 1537 and 1697) released with the original Xbox One. 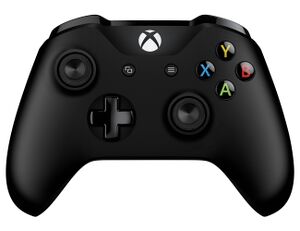 Third model controller (Model 1708) released with the Xbox One S.

The third standard model (Model 1708) was released along with the Xbox One S and have Bluetooth connectivity and textured grips. The Xbox logo is now surrounded by the main plastic on the front of the body. 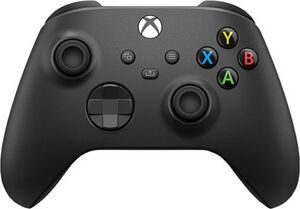 The fourth standard model (Model 1914) was released along with the Xbox Series X and Xbox Series S and has a slightly smaller body, a USB-C port instead of a Micro-B USB one, a Share button, and similar to the Elite Controller, it has a flat concave D-pad, textured grip and shoulder buttons. It's currently available in five different colors.[2]

Use with PC platforms

Use the 360Controller driver or Xbox One Controller Enabler.
On macOS Catalina (10.15) or later, Bluetooth support is available natively.[3]

The Xbox One Controller is natively supported by distros using Linux kernel 3.17 (or later).
Xow is a Linux user mode driver for the Xbox One wireless dongle. It communicates with the dongle via libusb and provides joystick input through the uinput kernel module. The input mapping is based on existing kernel drivers like xpad.

Controller can be found in Supported Controller Database and it's correctly recognizable as Xbox One controller.

Works without any drivers on any operating system that supports Steam.
Can be used just to send input from a controller to a PC. Go into Streaming options, hit 𝗬 and disable video and audio streaming.
Controller connected via USB works as expected.
Newer versions (2016 onwards, beginning with Model 1708) can be paired natively using Bluetooth.
Steam Link has experimental support for the wireless adapter and it works through VirtualHere too (Model 1537 and 1697). [4]
The controller support Rumble over Bluetooth after update.
May not work great unless connected to LAN or a low latency Wi-Fi.

Natively supported by most modern games via XInput. Sometimes, the controller will be recognized as Xbox 360 Controller.
Some XInput supported games may not work correctly with the Xbox One controller. Refer to the individual game pages for details.

The impulse triggers of the controller are two independent rumble motors located within each of the triggers, allowing developers to selectively vibrate the trigger when the player is performing an action that warrants such a feedback, such as firing a gun or charging an attack.
The XInput API does not expose this functionality. Games making use of the rumble motors uses the Windows.Gaming.Input API instead.
There is no available application which translates adaptive triggers haptic feedback signals into basic impulse trigger vibration.
The third-party DLL injection-based tool X1nput can be used to convert the normal vibrations of a game to impulse trigger vibration in many single player games. 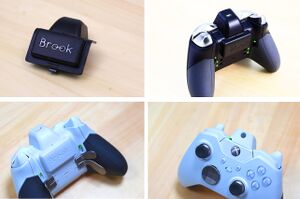 You can use the Xbox Wireless Controller to play PC, PS4, Switch, Xbox One games wirelessly.
Adds Motion Control (Gyro for PC/PS4/Switch and supports Turbo and Remap. For this option Steam has to recognize controller as Switch Pro Controller or DualShock 4
Emulates PS4 touchpad via combo keys (Brook key+Right Analog Stick).
Allow the use of headsets on the Xbox Wireless Controller for PS4/Xbox One. Battery lasts up to ten hours.

Cronus Zen allows the use of licensed gaming controller on all major gaming platforms, including all versions of PlayStation 4, Xbox One, Nintendo Switch, PlayStation 3, and Xbox 360, Windows PC, Android, Raspberry Pi.
Supports mods, scripts and macros.
Integrated Bluetooth and support for Xbox One & Xbox 360 Wireless Adapters.

It lets you use controller on Xbox One, PlayStation 4, PlayStation 3, Xbox 360 and Windows PC.
It allows you to convert your controller into an modded controller without installing any chips or other devices. Supports mods, scripts and macros.

Titan Two is an all-in-one gaming device that combines features of dozens of products in a single form factor. Supports PlayStation 4, Xbox One, Nintendo Switch, PlayStation 3, PlayStation TV, Xbox 360, Computers and more...
Customize the controller layout accordingly your needs for any game. 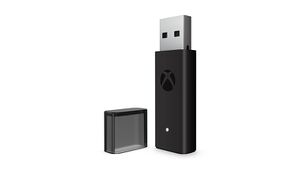 Supports up to 8 controllers.

Install Force Feedback Driver for Xbox One Controllers.[8] Some games will still not support vibration even with this installed.

Windows cannot initialize the device driver for this hardware. (Code 37)

Either Windows 10/11 PC with the App or Xbox One is required to update controllers firmware.
To update firmware on the controller, install Xbox Accessories App from Microsoft Store and connect the controller either with cable or wireless adaptor.

Displays a battery meter for connected XInput controller devices in the Windows taskbar.