Rayman Legends is a singleplayer and multiplayer side view platform game in the Rayman series.

The official online service is no longer available, making it impossible to play some of the content (the Challenges levels relied on Ubisoft servers that now are defunct).[1]

All versions should automatically update to the latest patch.[2] 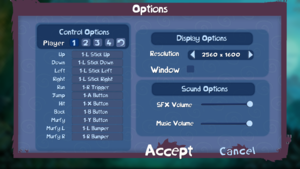 Button controls are used with Murphy instead of mouse or touchscreen controls.

Some interaction and popups are given visually instead of speech or text.

In the Steam version the language can be changed through the game's properties on the Steam library.
In all other versions the language must be selected when installing the game.

The game can be played online with Parsec (streaming of video/audio/keyboard/gamepad). To fix in-game slowdowns during streaming, run the game in windowed mode. For more troubleshooting see.

The game launches properly, and sound can be heard. But the screen stays completely black, no visuals at all.

Crash to desktop promptly after launching[edit]

Uplay performs a check and when you don't pass, the game stops after a few seconds.
Recent patches should've fixed this issue but some users may still have issues.

Fullscreen mode defaults to the monitor's minimum refresh rate, such as 24 Hz or 40 Hz, even if the screen refresh rate is set higher than that.