The Game of the Year Edition Deluxe includes all DLCs but smaller ones are only playable in English.
The Elder Scrolls Anthology includes both a retail version and a single Steam key that unlocks Morrowind, Oblivion and Skyrim along with all expansions and DLC.[1][2]
The GameStop PC Downloads/Impulse version is not compatible with some mods.[3] This version is no longer sold.

DLCs are no longer sold separately; the Game of the Year Edition Deluxe and retail Anthology include all content.

The current official patch is patch 1.2.0416 (Digital versions are already patched).
To check what version you have check the bottom left corner of the main menu.

Correct thousands of errors in the game, as well as providing slight tweaks to improve the gameplay experience.

Improves stability on systems with at least 3GB RAM by allowing the application to use more than 2GB RAM. Particularly useful when using mods.
Not necessary for the GOG.com version.[4]

BethINI (pronounced "Bethany") is an attempt to restore decency to the INI configuration files for games created by Bethesda, while optimizing your game settings for optimal graphical fidelity and performance. 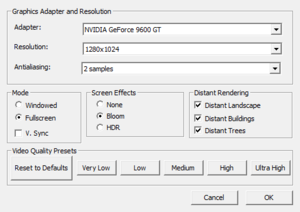 By default, Oblivion does not come with an option to activate Anisotropic Filtering, but you can force it from the AMD Catalyst Control Center or from the NVIDIA Control Panel. The performance hit is substantial on some low-end computers.

This table works with the assumption that the default 75° is optimal for screens with the 5:4 aspect ratio. 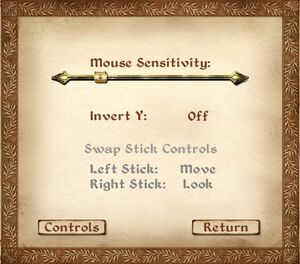 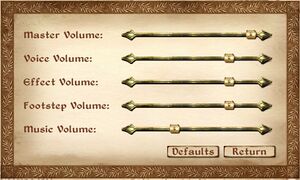 Digital versions of The Game of the Year Edition Deluxe are only playable in English.

The game crashes upon exiting to desktop

The settings reset every time the game is restarted

Often happens because the game's process is being shut down prematurely, such as through crashes.

This is a common problem with installing mods. It is often caused by a mod's assets being overwritten by the game's own BSA archives on anything other than a retail disc install, such as digital, since the BSAs will be timestamped by the date the game is installed, not when they were last modified. This can be fixed by doing one of the options below.

After 200 hours of playtime with a character, game animations and effects may freeze. Commonly referred to as the "Abomb" bug.

This is related to Nvidia Graphics cards 8800 or later.

Oblivion mods can be found at Oblivion Nexus.

Through the Valleys - Vanilla Plus Modding Guide is a comprehensive, up-to-date Oblivion modding guide by PushTheWinButton that focuses on setting up a vanilla-friendly modded game that is also stable.

Mod managers are used to simplify mod installation. Use one of the following.

Oblivion Mod Manager is an easy-to-use mod manager, good for beginners. It allows modders to pack their mods into OBMM-specific .omod archives for easy installation, as well as making it easy for users to tweak options.

Powerful mod manager. Requires a bit of a learning curve compared to OBMM but still relatively easy to use. Mods can be packed into Bash-specific BAIN archives for easy installation and tweaking options for users.
Used to create a Bashed Patch to resolve conflicts between mods and merging records into a single .esp file.

Powerful and easy to use mod manager with mod virtualization that allows the installation folder to remain clean.
Using Mod Organizer for Oblivion requires some extra tweaking to get the game to recognize some mods installed through it, specifically OBSE and OBSE plugins. See this guide for details. (Works for both OBSE and xOBSE)

Tweaks the enlarged Xbox-optimized UI to better fit PC. The HUD and fonts are smaller, and items are easier to find in the inventory.

Updated version of MajorJim's classic UI replacement. Fixes many issues contained in the original mod. Use if preferring something closer to the vanilla layout than DarNified.

Prevents the game from crashing upon exit and saves the .INI file before exiting the game so settings do not reset to their initial values upon restarting the game.
This is also included in Oblivion Display Tweaks.

Forces Oblivion to handle BSAs and loose files the same way that Skyrim does.

Fixes the Oblivion mod limit bug, allowing the maximum of 255 plugins to be loaded.

Replaces the buggy vanilla auto save and quick save features with two small scripts.

Fixes engine bugs that may cause crashes. Can be used alongside EngineBugFixes.

A utility that extends the script capabilities of vanilla Oblivion, allowing modders to better take advantage of the engine. Many mods require this utility, and installation instructions are included in a README, when you download it.
When running through Steam, OBSE requires use of the Steam Overlay. If the Steam Overlay doesn't appear in game, try running Steam in administrator mode.
Community maintained up-to-date fork of Oblivion Script Extender (OBSE).

Plugin load order optimiser for TES IV: Oblivion and other games. Provides thousands of plugin-specific messages, including usage notes, Bash Tag suggestions, requirements, incompatibilities, bug warnings and installation mistake notifications. Supports the sorting of plugins ghosted by the Wrye Bash utility, is highly customisable, has been translated into multiple languages, and is simple to use.

Can clean .ESP files from "dirty edits" which are essentially errors made by original mod authors that can cause incompatibilities and prevent other .ESP's features from working.

A complete list of console commands can be found here.