Re-released as a free download in 2009 to celebrate the 15th anniversary of The Elder Scrolls series.[2]
DaggerfallSetup is a ready-to-play installer for modern Windows systems.
DOS/32A fixes most crashes and save corruption issues.[3]

The GOG.com version is available by purchasing any other game on GOG.com published by Bethesda Softworks.
A demo is available.

Copy into the Daggerfall folder and run using DOSBox. This patch contains all previously released patches.

This patch adds 16 new quests and additional artifacts to the game.

Addition unofficial patches (and mods) can be downloaded here.

To play Daggerfall properly under DOSBox, make the following changes to the DOSBox configuration file):

Changing the "core=" command to "dynamic" will allow the game to run at a much higher framerate when using high detail settings, as opposed to "auto."
Changing scaler= to "normal3x" will emulate the game in windowed mode at twice the resolution, staying faithful to the original's size. Paired well with aspect=true.
Unlike The Elder Scrolls: Arena, turning the aspect command to true doesn't affect gameplay speed.
Changing the "cycles=" command to max will force DOSBox to emulate the game at a higher framerate.
Using "cycles=max" will cause heavy movement and turning issues. "cycles=fixed 50000" is recommended.

DOS/32A fixes most crashes and save corruption issues.[3]

Daggerfall can be run without the CD to improve performance and convenience.

When installing the game under DOSBox, the guide provided by Bethesda recommends SoundBlaster 16 for the music and sound emulation. This provides faithful, but worse musical-quality, as the soundtrack was composed for a General Midi compatible Roland Sound Canvas.[4] For increased musical quality, the sound card settings must match these:

Unlike the previous game, Daggerfall's music seems to have been somewhat remixed to fix SoundBlaster compatibility, some tracks even being named "FM" (FM-Synthesis) as separate versions.
While improving musical fidelity, GeneralMIDI will make various dungeon tracks sound "awkward" due to the new instrument sounds, but isn't as distracting as Arena.
Some dungeon music won't play if GeneralMIDI or SoundBlaster is used, as both modes have special music. GeneralMIDI seems to have the most variation in music.

BETAPLYR.DAT contains control configuration settings (other in-game settings are stored in each save rather than shared).
DAGGER.GRD contains the ChildGard password. This file is only present when ChildGard is enabled.

Saves are stored in folders SAVE0 to SAVE5 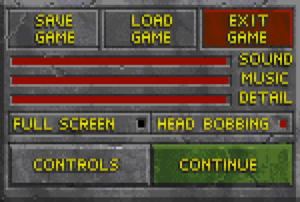 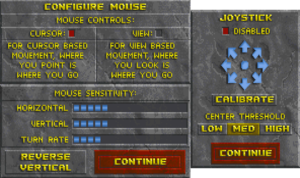 GUS emulation does not work[edit]

Despite best efforts, Daggerfall will not properly play music through gravis cards, despite being listed in the setup program. More info here and here.

If you are running Daggerfall via DOSBox there can be a problem with movement: you can't run backwards and jump. In this case you need to set your cycles amount to fixed 50000, or 50%. You can do this in DOSBox config or pressing Ctrl+F11 / Ctrl+F12

Save corruption is caused by memory issues. Use DOS/32A to prevent save corruption. DaggerfallSetup already has this fix. To fix saves that are already corrupted see UESP Wiki's Daggerfall Corrupted Savegames page. 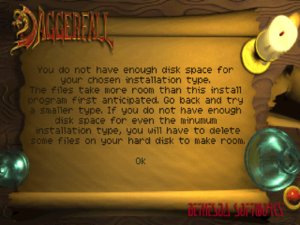 This error occurs when there is insufficient space or the DOSBox -freesize parameter has not been used.

Daggerfall lists the Roland MT-32 as a sound option but it doesn't actually work and will crash the game.[6] Use MPU-401 instead.

Daggerfall Unity is a project to remake the entire game in the Unity Engine complete with modern graphical enhancements, a modding community, and detailed tutorials on how to mod it yourself. Not all game features are implemented (see the roadmap for details).