Persona 4 Golden is the PC port of the detective/mystery JRPG game of the same name for PlayStation Vita from 2012, itself a remaster of the original Persona 4 released in 2008 for Playstation 2. While the PlayStation Vita version expanded upon the original PlayStation 2 title with new features, story elements, characters, spoken lines, anime cutscenes, and more, the PC version adds the ability to choose between English and Japanese voice acting, and focuses on improving the technical state of the game and features enhanced graphics, upscaled cinematics, and support for an uncapped variable framerate.[1][2] The development of the PC port was led by Atlus with assistance from Preapp Partners.[3]

Fixes motion blur, DPI scale and frame pacing issues with the game. For pre-configured standalone version for this game, see here.
Incompatible with newer versions of the P4G mod loader. 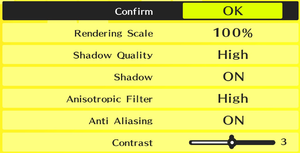